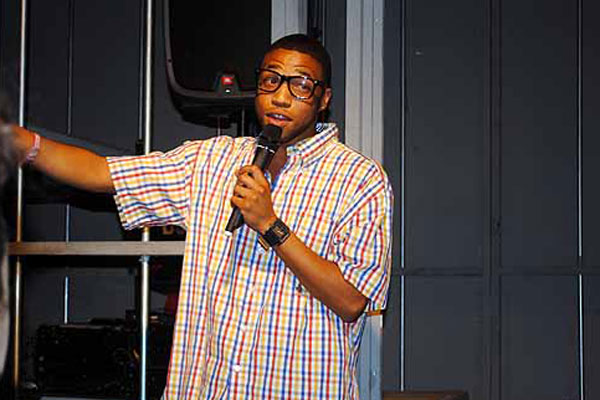 HOUSTON – Sickle Cell Anemia is an incurable disease that is often overshadowed and overlooked.  But on September 26, some of Houston’s brightest comedians and artists joined together for a night of fun and entertainment to raise money for the disease that is no laughing matter.

Attendees piled into the Encore Theater near downtown Houston for “Laugh4ACure,” an event created by the Simply Borne Initiative.

The Simply Borne Initiative was started to encourage the millennial generation to increase their social responsibility through creative and charitable initiatives that benefit non-profit organizations and other social causes.  This year, they selected the Sickle Cell Disease Association of America in recognition of Sickle Cell Awareness month for their 3rd annual benefit.

The atmosphere was soft and filled with warm laughter. Elmo Parker was the perfect host for the night. He provided great energy and engaged with the crowd while introducing each comedic act, dishing out a little humor of his own as well. This year’s showcase included returning headliner Mickey Housely (Houston’s Funniest Person 2012 finalist), along with fellow comedians Nate Mingo, Kris Atkins, Dopenizzy, Shabazz and a surprise performance from Blame the Comic.

The social media networks were flooded with hashtags #Laugh4ACure and #Fight4SickleCell, tweeting pictures, memorable moments and short video clips of the acts.

Music duo All Day electrified the crowd during intermission with their amazing performance and acoustic beats and the night concluded with a raffle giveaway of a painting to an audience member.

Sickle Cell Anemia is the most commonly inherited blood disorder in the United State and affects more than 100,000 people. Contrary to popular belief, African Americans are not the only racial group that suffers from the disease; Hispanics, Greeks and other racial groups are often affected as well. The average life expectancy of Sickle Cell patients in the U.S. is 42 for males and 48 for females. Complications from this disease include severe pain, necrosis, organ damage and death.

This year’s event hit very close to home for event planner Vanessa Wade of Connect the Dots PR, who knows all too well what it is like living with the disease.  Having been diagnosed with this disease at birth, she knows how important it is to raise awareness and hopefully find a cure. She was able to shed light on the myths of Sickle Cell Anemia and also on it being a “black only” disease.

“Sadly, many people have never heard of Sickle Cell and don’t understand its impact or how it affects those of other races which is why events of this nature are important to the Sickle Cell Community. It gives us a chance to talk about the disease and create much-needed awareness,” Wade said. “I am hopeful that this event is the start of discussions among health care professionals and everyday citizens. I am truly thankful for the spotlight finally being placed on Sickle Cell.”

For more information on how to contribute to the research for sickle cell visit www.sicklecelldisease.org.