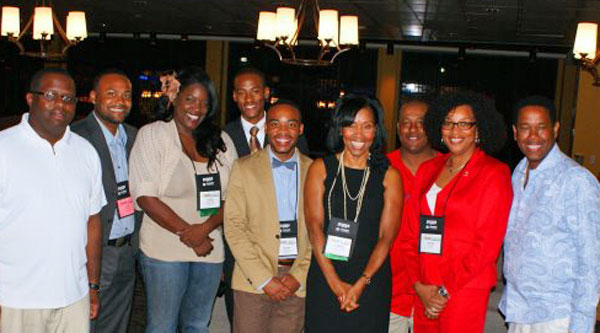 Kickin’ things off at NABJ 2012 convention in New Orleans

I kissed my kids goodbye before I left and kept their little faces in my head as my plane departed Bush Intercontinental Airport in Houston and headed to New Orleans, Louisiana.  As quickly as the United Airlines jet took off, it landed just 50 minutes later, which was darn near less time than my car ride to the airport from my side of town.  Sweet!

I bypassed paying for a taxi cab ride – because I knew I was in for one expensive week – and paid for the Airport Shuttle Bus to take me to the Hilton Riverside on Poydras Street all for the lovely price of $38 (round trip) thank you very much!

It was Tuesday, and I got into town a day early for the National Association of Black Journalists 37th Annual Convention and Career Fair.  Would you believe it was my first time attending and I was actually going to be a panelist? Huge honor! Check in was a breeze (although it wasn’t the next day for hundreds of others checking in due to a computer malfunction) and I paid for my entire 5-day stay upfront and closed it down…no room service to be billed (I’ll pay in cash)..no Wi-Fi (my droid phone was equipped with that) and no long distance phone calls (hey, who leaves home without their phone anyway?)  Let’s just say I wanted no surprises after forking over nearly $700 for my accomodations, got my room key and headed upstairs.

I took a quick little break and admired the view of the Mississippi from my room.  In fact, it was so nice, I refused to  close my curtains the entire time I was there.  Not such a smart idea when tour boats are passing by so close.  I had one little embarrassing incident when a couple of guys waved at me while I was dressing for bed, but that is NOT for this story! I got a call from a fellow HABJ member letting me know he had arrived.  I left – armed with my trusty camera of course – and walked just a quick little half-block to the Gordon Biersch Brewery for a bite to eat –and a stiff drink!  We were in the Big Easy, right? The place was packed because some sort of basketball game was on…  I got a blank stare from Todd when I said “I thought they played the other day?”  Ummm, yeah, it was the CHAMPIONSHIP PLAYOFFS between Oklahoma City and Miami..shoot me now, make fun of me later, I am sooooooo not a sports fan.

Anyway, I halfway enjoyed some semi-sweet, semi-spicy wings and two different drinks – both which were too weak for my taste – and fled that place during halftime to head back to my room.

I had other business to tend to:

I couldn’t fight off the sheep when I fell into my King-sized bed, and half-watched/ half-smirked at the nightly news.  Poor grammar from a witness to the shooting death of another young black man is the same anywhere you go, I figure.  Gots ta be a better way!

I woke up the next morning…unwilling to leave my room as I went over my presentation one more time…and ordered a $29 plate of eggs, bacon, grits, toast and orange juice for one.  Room service is a damn ripoff I tell ya!  I shared a few “highway robbery” jokes with the woman taking my order and paid in cash when the food arrived. After breakfast, I went downstairs to meet with colleagues ahead of our “Free Tools for Journalists” panel discussion; Multimedia Journalist and Professor Serbino Sandifer Walker, who would serve as moderator, and fellow panelist Misha Leybovich, the founder of an exciting new software tool “Meograph,” which is scheduled to officially launch to the public on July 9.  I can’t wait!

Afterward, I went back up to the room to freshen up and change, then headed to panel. Misha and I joined the wonderfully talented Mark S. Luckie, former Washington Post social media editor and founder of the 10,000 Words blog, who was just appointed Twitter’s creative content manager for journalism.  To say I was in great company was a SEVERE understatement.

Click here to see bios of all the panelists.

Luckie was a social media powerhouse outlining everything from the basic applications of Facebook and Twitter, to creating lists and subscriptions, how to properly use search tools on the sites for news gathering, to taking advantage of other “free” tools for video and photo editing, maps and analytics.

Click here for a links to free tools you can use.

I spoke about the importance of using social media in the newsroom, developing an online personality and how to maximize your reach and engagement.  I shamelessly did my “Wilona Woods from Good Times” impression to illustrate how it’s not what you say; it’s how you say it.  Think of this, there are a million others dropping the same links to the same stories on Facebook and Twitter; why should people read yours?  Sure, there were plenty of other “gossips in the ghetto,” but everyone loved the way Wilona gave them the deets!  Granted, no one is asking you to turn into the galloping gossip, but you should show some sort of personality when speaking to your fans.

Misha brought it home, causing many jaws to drop, introducing us to “Meograph” which allows us to automatically create, watch and share interactive multimedia stories through the use of videos and infographics.  His tool merges Google maps with video, text, photos etc. into an interactive timeline for digital storytelling.  It really is a fantastic tool for reporters to highlight news stories with continuing coverage, but the possibilities seem almost endless.

Panel discussion was successful and we actually converted a few “newsroom resisters” who were used to doing things the traditional way; keeping the audiences out of their business and only reporting live on air.  Sorry peeps, it “ain’t poppin’ like that no mo!”  The way the news is delivered today is on a totally different playing field.  The Internet, the tweets, retweets, likes and shares of social media has taken the audience from in front of the television screens (at noon, 6 p.m. and 10 p.m.) and has placed the world – your world—into the palms of their hands.

Needless to say, some attendees were excited to set up accounts and do their first live tweets immediately after the session…..one small step for man…one giant leap for …oh, you get the drift! Joe Biden, Melanie Fiona and Bourbon Street were still ahead of me, and that was just night one!  Can you say whhhhhhhhaaaaaatttttt?!