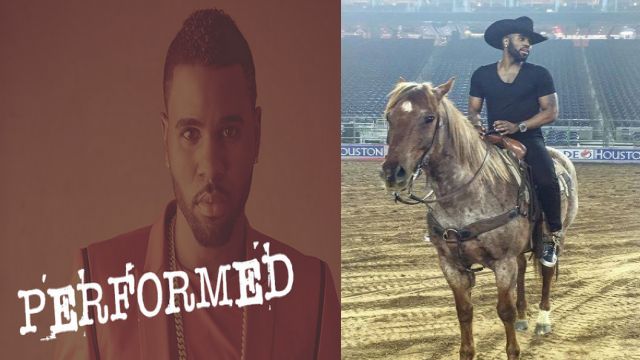 Pop singer and dancer Jason Derulo was this year’s headline  during “Black Heritage Day” at the Houston Livestock Show and Rodeo, but we’re not sure he was a big hit with the Texas audience.

Derulo, who had smash hits “Talk Dirty” and “Get Ugly,” is also known for his former relationship ties with “American Idol” winner Jordan Sparks.

During the hour long set at NRG Stadium on March 4, Derulo tried hard to get his dance party started in the packed stadium.

The singer rolled out on the back of a Ford pick-up truck, wearing a red jacket and red high top sneakers, then was transported to a rotating stage in the middle of the stadium.

Although Derulo had great backup dancers (that upstaged him at times) and great dance sequences, the singer had to almost beg the audience to stand up multiple times.

In the apparent diverse crowd, it was not hard to notice a particular crowd of people who almost had to find a reason to stand up and “bounce” to songs that some would argue are not targeted or geared toward the normal “Black Heritage Day” concert attendees.

Despite the fact that Derulo is Black, Haitian to be exact, it is clear that the singer’s sound of music is not for “the people.” Headliners such as Beyonce, Alicia Keys and Mary J. Blige have all shattered rodeo records and have caused audiences to go crazy with the music that caters more toward hip-hop and R & B lovers.  No shade, but many were saying they would have to wait for Pitbull to bring them some flavor instead.

It was only a few times where Derulo’s music had a bass that got the crowd moving and thumping.

Many questioned the rodeo committee’s choice for the singer to headline Friday night’s show. If it was “Black Heritage Day,” the only indication of that was in an announcement only broadcast twice during the festivities.

After it was announced that Derulo would be the feature artist, Black Twitter and Facebook went “HAM” with people saying “Heck No.”  There was so much backlash that rodeo officials released the following statement defending their decision.

“The Houston Livestock Show and Rodeo is excited to have Jason Derulo as part of the 2016 concert lineup. He’s sold over 50 million singles as a solo artist, and has earned 11 platinum singles. His tremendous success, which includes five platinum singles just from his latest album, and more than 2 billion views on Youtube and 1 billion plays on Spotify, make him the type of artist to help the Show reach even more of our city’s diverse community. And although Black Heritage Day includes the evening rodeo and concert in NRG Stadium, the real heart of the celebration is the amazing array of local groups who participate on the grounds during the day, which in 2015 included marching bands, dance groups, Buffalo Soldiers and African-American quilters.”

We wonder if there are many people of color in the decision making process of choosing the talent for the lineups.  Black Heritage committee members said they had no hand in choosing Derulo.

Anywho….take a look at a brief clip of video footage capturing audience reaction during Derulo’s performance. Not too hype, as they say.