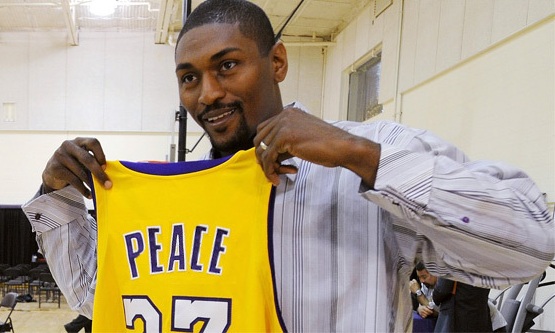 Well his parking tickets have been fixed and he’s been granted his wish.  The player formerly known as Prince – oops, we mean Ron Artest – is now officially answering to Metta World Peace, according to the Los Angeles Times.

A Los Angeles Court commissioner made the final approval Friday for the 31-year-old Lakers forward to be legally called whatever he wants.  Artest requested the name change in June, but had to wait until his unpaid tickets were wiped off the books.

His first name, Metta, means loving and kindness toward all.  And his last name, World Peace, is what every beauty queen/ pageant contestant wants.

“Changing my name was meant to inspire and bring youth together all around the world,” World Peace said. “I’m glad that it is now official.”

Now after a statement like that, how can we poke any fun? All jokes aside, we respect his decision and wish him well with the new name and new endeavours.

We particularly wish World Peace good luck as he prepares to shake his new, peaceful “groove thang” on next season’s “Dancing with the Stars.”