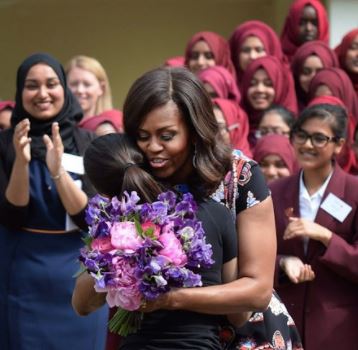 According to an internal document obtained by CNN, the “Let Girls Learn” program, which she and President Barack Obama started in 2015 to facilitate educational opportunities for adolescent girls in developing countries, will cease operation immediately.

CNN further reported, while aspects of the initiative’s programming will continue, employees have been told to stop using the “Let Girls Learn” name and were told that, as a program unto itself, “Let Girls Learn” was ending.

“Moving forward, we will not continue to use the ‘Let Girls Learn’ brand or maintain a stand-alone program,” an email sent to Peace Corps employees by the agency’s acting director Sheila Crowley stated.

In true first lady fashion, Mrs. Obama used her own now famous words of advice of “When they go low we, go high,” showing that she and her husband will not give up on the project they are passionate about.

“Excited by the potential of the Obama Pres. Center. Barack & I will continue to champion the issues close to our hearts including girls ed,” Michelle posted on Instagram.