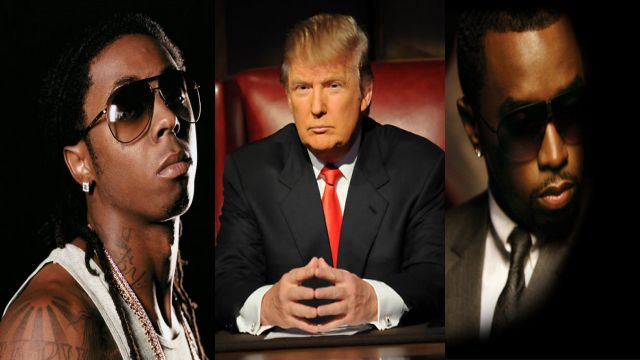 Donald Trump and the hip-hop generation: Iconic billionaire celebrated in many raps

I ran across this CNN article by Deena Zaru and thought, “Yes indeed,” Donald Trump can do no wrong when it comes to the hip-hop generation.  His wealth and status is celebrated in many raps, often times being referenced as a barometer of “THAT LIFE.”

Check out a snippet of the article below:

Billionaire real-estate mogul Donald Trump, who was known to Americans as a celebrity businessman for decades before his presidential run, has been named-dropped in hip-hop lyrics for decades. And like Hillary Clinton, who has also been a go-to reference, Trump is inserted into lyrics to symbolize status, wealth and power.

He is mentioned by rappers like Lil Wayne, Kanye West, T.I., Gucci Mane, Nelly, Young Jeezy, Ludacris, Meek Mill, Big Sean, P Diddy, among others, and some have brought him up in more than one track.

Here are some examples:

“Richest n—- in my hood: call me Donald Trump/ The type that count my money while I smoke a blunt,” from Young Jeezy’s “Trump,” featuring Birdman.

The Republican presidential candidate is referenced largely in the same way across the board and what we learn about him from more than 40 hip-hop tracks is consistent: Donald Trump is rich and he can do whatever he wants. And so far, this just might be his greatest political asset.

“People know Donald Trump and they’re used to seeing that kind of attitude and swagger with him,” Lanhee Chen, a Republican strategist and former policy adviser to Mitt Romney, said. “He’s been playing on his wealth for a long time.”

Trump has been linked to Bill Gates on several occasions and his name is used when an artist raps about achieving success without limits:

In Kendrick Lamar’s “Determined” ft. Ash Riser, a song about becoming successful, Lamar raps “Homies on the block can say whatever they want/ I don’t wanna be a dealer, I wanna be a Trump— Donald that is.”

In “Off the Corner” ft. Rick Ross, Meek Mill raps “Going Donald Trump numbers on the corner/I made a million on that corner.”

And in Big Sean’s “Get it (DT),” Pharrell raps “I’m tryna stuff em until I can’t fit no more/I’m talking Donald Trump level/I’m trying to get these dreams off the ground.”

And this, in many ways, has been a dominant strength of the Trump campaign and is often cited by Trump supporters as a favorable quality.

Trump supporter Susan DeLemus says that Trump’s wealth is a major asset to his campaign.

“We’re certainly not low information voters. I’m actually a state representative [in New Hampshire] and we know what’s going on,” DeLemus said. “We’re glad that Trump’s got the money because he can’t be bought.”

Chen said that Clinton, who has also been questioned about her ability to relate to the average American, is in a similar position.

“She doesn’t seem to want to acknowledge her wealth. She seems like she wants to hide it,” Chen said, referencing comments Clinton made to ABC’s Diane Sawyer in 2001 that she and her husband were “dead broke” when they left the White House. Last year, Clinton called those comments “in-artful.”

Meanwhile, the Trump campaign announced in a statement that the billionaire’s “net worth is in excess of TEN BILLION DOLLARS.” That figure is far higher than the net worth of Clinton, Jeb Bush and Romney combined.

In the statement, the campaign also boasts that the FEC reports were “not designed for a man of Mr Trump’s massive wealth.”

Trump’s wealth has not been a “disqualifying factor”— instead, it “helps to make his case,” Cardona said. “He is beholden to no one and therefore, in his mind, he can put in place whatever policies he deems appropriate.”

But Chen tells CNN that this strategy might not translate well for a other candidates.

“I’ll tell you, with Gov. Romney there were months and months and attacks from President Obama’s campaign about his success and it wasn’t just that campaign. It was Newt Gingrich, Perry and others,” Chen said.

While candidates are often criticized for downplaying their wealth, Trump has been accused by some of exaggerating his fortune. Therefore, the “he’s too rich” line of attack that wealthy candidates often have to reckon with, is a difficult one to manage when it comes to Trump.

‘We gonna take over the world while these haters gettin’ mad’

Trump brings up his wealth in nearly all of his stump speeches.

In Mac Miller’s 2011 Billboard-charting hit “Donald Trump,” the Pittsburgh rapper, describes one who possesses a Trump persona, perhaps Miller himself, as the “flyest m——f—– in the room.”

“B—— hating on him, cause he started out here locally/ Hopefully, I’ll be at the top soon … Take over the world when I’m on my Donald Trump s—/ Look at all this money, ain’t that some s—? … We gonna take over the world while these haters gettin’ mad.”

When the song came out Trump threatened to sue the rapper, whom he refers to consistently as “Little Mac Miller” on Twitter, for using his name without permission.

He also posted a Vine, criticizing the rapper’s “crummy gift,” and added that he would “rather have the money.”

However, Trump also couldn’t help himself from tracking how many plays the song has on YouTube and occasionally, boasting about it on social media.

Before the 2013 Twitter tirade above, when the song hit 20 million views in 2011, Trump posted a video giving Miller his co-sign and referring to him as “the new Eminem.”

“A lot of people are calling me about the Mac Miller rap song. Now, it’s named ‘Donald Trump.’ Maybe you should pay me a lot of money, but it just did over 20 million people, tuning into Mac Miller. So in one way, I’m proud of him. I haven’t actually seen the language … Probably, it’s not the cleanest language you’ve ever heard … But the ‘Donald Trump’ song just hit over 20 million, that’s not so bad. I’m very proud of him.”

And most recently, in an interview with The Hill last month, Trump ended the interview by playing Miller’s hit, calling it a “great song” and boasting that it had gotten “almost a hundred million hits.” Since then, it has gained almost a million more.

Miller’s “Donald Trump” hails Trump’s “I’m really rich” attitude, and to some voters, Trump’s wealth has actually made them trust him more.

And when asked whether she was bothered by Trump attending a fundraiser at the home of Ernie Mock last week, where guests were charged $100 a head and asked to make checks payable to Donald J. Trump for President, Inc., DeLemus said that she is not bothered.

“If they like you and they want to see you get in … people will open up their hearts and their pocket book,” DeLemus said. “If you can be bought by a lobbyist or a company that a lobbyist is representing— that’s bad. But if you’ve got people who are heartfelt and want to contribute because they feel that they can do something … that’s their prerogative and I don’t think that Trump is saying ‘oh please, somebody send me some money.'”

CLICK HERE TO READ THE REST OF THE STORY.