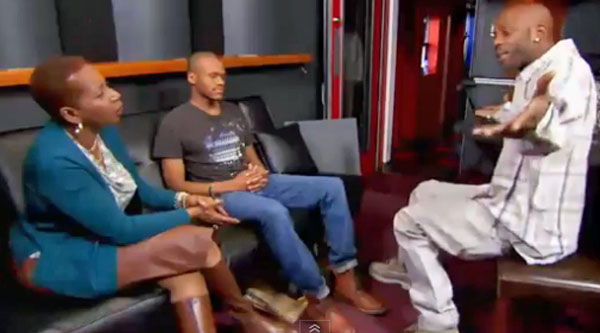 VH1’s Behind the Music said it best, Earl “DMX” Simmons has been a prisoner most of his life; behind bars and because of his own demons.

Those demons, appear to resurface during a taping of “Iyanla:  Fix My Life.”

Clips from a preview  of the season 2 premiere shows the host and the rapper, both with troubled pasts, get into a shouting match, with Mrs. Vanzant showing no signs of backing down from the in-your-face, keep-it-real questions.

“Let me stop playing with you, let me just go right there,” Vanzandt said.  “Are you high?”

Another scene shows Vanzandt laying down the law.

“He don’t get to roll up in our park and play his games,” she said.

Then the standoff happens.

Vanzandt: “I’m not intimidated by you.”

DMX:  “You don’t got to be intimidated, man, stop running your mouth!”

Vanzant:  “You don’t get to speak to me EVER AGAIN!”

A new season of Iyanla: Fix My Life returns with a powerful, 90-minute episode. Iyanla travels to multiplatinum rapper and actor DMX’s hometown of Yonkers, New York. Things go awry as DMX’s emotions run high and his temper takes over.

Tune in to the season premiere of Iyanla: Fix My Life Saturday, April 13, at 10/9c on the Oprah Winfrey Network (OWN).

We don’t know the actual sequence of events and hope that most of this is just some careful and crafty editing to peak our interest, but if it is not, shame on DMX for talking to any woman like that!  But seeing his story, you know he has had it rough and is struggling day to day to keep it all together.  He best described his experience in the VH1 documentary.

“What you grow up with is what you accept as normal, it’s not as hard as some people think it is,” said DMX.

To revisit his riveting “Behind the Music” documentary, see the video below, courtesy of VH1.