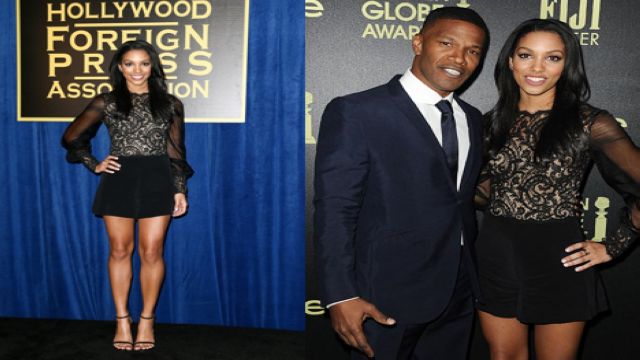 The 21-year-old has beauty, brains and Hollywood running through her veins.  The University of Southern California senior is a model and actress, which is not surprising since her father is Jamie Foxx.

Corinne is no stranger to the red carpet; she’s been stepping onto it with her dad ever since she was a kid. Pretty soon she will need a date of her own.

The rising star recently posed for a Ralph Lauren and Icing campaign.

“I’ve grown up watching my dad establish himself as a well-respected actor,” she said. “I’m honored … to now share the same stage where he’s been recognized for some of his greatest accomplishments.”

The “Miss or Mr. Golden Globe” honoree is the daughter or son of one of the respected leaders in the film industry, and they are required to assist during the Golden Globe Awards ceremony. Corinne will follow in the footsteps of former Golden Gold honorees, Greer Grammer, daughter of Kelsey Grammer; Francesca Eastwood, daughter of Clint Eastwood and Frances Fisher; and Sam Fox, son of Michael J. Fox and Tracy Pollan.

“We are delighted to have Corinne Foxx continue the tradition,” HFPA President Lorenzo Soria said. “Like her father, she leads a fine example of following her dreams and we can’t wait to see what she does next.”

Make sure you catch Corinne on the stage with host Ricky Gervais handing out awards to Hollywood’s A-listers during the 73rd Annual Golden Globe Awards on NBC, Sunday, Jan. 10, 2016, at 8 p.m. ET.

Congratulations Corinne Foxx! N.W.A will definitely be tuning in.