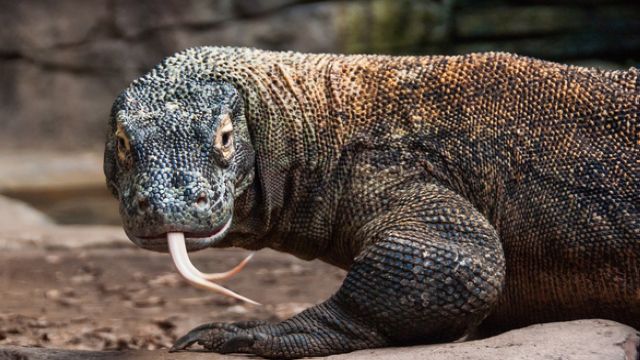 The Houston Zoo family is mourning the loss of one of its most beloved creatures, and star attractions.  Smaug, the 17-year-old Komodo dragon, was humanely euthanized Tuesday after significant lumbar spinal cord compression was found, according to zoo officials.

The zoo’s herpetology and veterinary team made the decision after an MRI and CT scan showed that Smaug’s condition was severe and his quality of life was beginning to suffer as he was unable to walk.
The zoo went to extraordinary measures to make the more than 200-pound lizard comfortable.

Just last year, Smaug was treated for a complicated front limb weakness that gained national recognition for the zoo’s incredible attention to animal health and well-being. For the past year and a half, Smaug was thoroughly evaluated and treated by a team of specialists from all over Houston, including veterinary chiropractor Dr. Jessica Marziani and Gulf Coast Veterinary Specialist’s neurologist, Dr. Randy Longshore, as well as a team from the Orthotics and Prosthetics Program at nearby Baylor College of Medicine.

The experts have determined that his lumbar spinal cord compression is not linked to his previous weakness in his right front limb.

Smaug was a guest and staff favorite at the zoo ever since he was brought to Houston in 2001 as a young lizard. He was hand-raised by reptile supervisor Judith Bryja and was a can’t-miss part of zoo visits. He was a frequent participant in both Enrichment Day and Feast With the Beast where guests could see him powerfully devour ostrich eggs or even whole goat carcasses.

“Smaug was an incredible ambassador for his species and he will forever be missed,” said Sharon Joseph, vice president of animal operations at the Houston Zoo. “It is never an easy decision to euthanize an animal, but it is one we make with the animal’s well-being as the top priority. With world-class animal keepers, four incredible veterinarians, and a complete veterinary clinic, our animals receive the best care possible, and that includes end-of-life decisions.”

Komodo dragons are listed as vulnerable to extinction by the IUCN. They are the world’s largest lizard and native to the Lesser Sunda Islands of Indonesia.