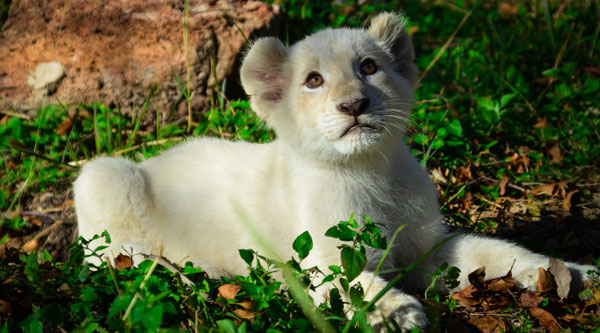 NEW BRAUNFELS, Texas — Animal World & Snake Farm Zoo welcomes the addition of white lions to their collection.  White lions have been around for centuries, unique to the Timbavati region.  The earliest recorded sighting of white lions in the Timbavati region was in 1938.  No longer found in the wild until they were reintroduced to the Timbavati area in 2003.  It is believed there are only around 10 left in the wild today.  White lions are not albinos.  They are leucistic and have pigment visible in the eyes, paw pads and lips.

They may be the King of the Beasts, but white lions are critically endangered and are a symbol of community conservation, protection, and restoration efforts.  In 1975 there was an estimated 250,000 lions in Africa, yet today the continent wide population stands at a mere 25-30 thousand individuals, only 300 of those being white lions.  Animal World & Snake Farm Zoo is focused on establishing a healthy captive population and is committed to the conservation of all African lions.  Come see “Ghosts of the Jungle” featuring the white lions of Africa, catch a keeper talk and help the zoo bring awareness to the plight of the African lions in the wild.

Lions are they most social cats, often living in “prides” of up 30 members. African lion cubs are born with spots, but these spots usually fade by the time they are six or seven months old.  In the wilds of Africa, the lion cubs are under the care of the male lion while the female is out hunting.  Adult males can weigh 300-550lbs. and stand about 4ft. tall at the shoulder, while females are much smaller. The two can easily be told apart by the male’s mane. Lions, like most cats, spend most of their day sleeping- nearly 20 hours per day! Lions have the loudest vocalizations of any cat and an adult male lion’s roar can often be heard from up to 3 miles away.

Animal World & Snake Farm Zoo is open daily and offers shows and programs to educate our visitors.  Proceeds from admission and gift shop purchases directly help the animals at the Zoo by providing funding for new exhibits, food, enrichment toys and veterinarian care.  Animal World & Snake Farm Zoo donates to a number of local and global conservation efforts and is committed to education and animal care.

Check out our website calendar for daily show postings or like us on Facebook to keep up with what’s going on at the zoo!  Help us give our new lion cub’s names.  You can submit your name idea on our Facebook page.  We are looking for a male and female name.  We will announce the winner on Saturday, February 15, 2014 during our 3:00 pm “Ghosts of the Jungle” show.