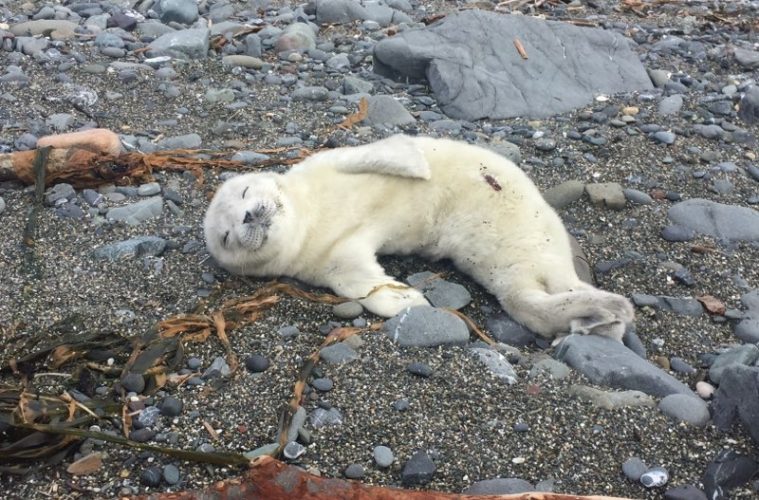 Galveston, Texas – After traveling 2,324 miles from Crescent City, California to Galveston Island, Tomato and Ravioli have found their forever home at the Moody Gardens Aquarium Pyramid.

It’s been a long journey for the two harbor seal pups, both just shy of being 1 year old. Each was rescued separately last year by the Northcoast Marine Mammal Center in Crescent City and cared for, but due to health problems both pups are non-releasable to the wild.

That’s where Moody Gardens stepped in.

“We had been looking to add seals to our North Pacific Exhibit and had been on the waiting list for a few years when we got the call about Tomato and Ravioli,” said Diane Olsen, assistant curator of seals and penguins at the Moody Gardens Aquarium Pyramid. “It seemed like a perfect fit. The addition of Tomato and Ravioli furthers Moody Gardens’ commitment to assisting animals in the wild that are not able to be released back.”

The seal pups arrived at Moody Gardens last Friday. They have spent the last few days settling in. They’ll spend the next 30 days inside a Holding Room behind the scenes of the North Pacific Exhibit before going on exhibit with fellow harbor seals Siku and Porter, along with California sea lions Squirt and Sam later this month.

The two go together, well, like tomato and ravioli. Volunteers at the Crescent City center named the two pups after they were rescued, continuing the 2017 naming theme after food items.

The center received a rescue call on its hotline regarding Tomato last July. Just 4 months old, he was found near the center at the Crescent City Harbor boat ramp with severe injuries due to a suspected dog attack. Typically, volunteers would wait for a rescue team to arrive before moving a seal, said Karen Helms, Northcoast Marine Mammal Center executive director. But, a boat in the harbor was leaking fuel dangerously close to Tomato. With no other resources at the moment, Helms swiftly swept up the pup and wrapped him in her sweatshirt jacket and immediately took it back to the center for treatment.

Most of the young seal pups rescued by the center each year are a result of off-leash dog attacks. Many of them don’t survive, said Helms.

Rescued at just 32 pounds, Tomato has grown to a whopping 110 pounds and is 50 inches long. All of his injuries healed well, but one left him blind in one eye. With weakened eyesight, he would not be able to forage for food well enough to sustain himself in the wild, which could lead to malnourishment.

Ravioli was a pre-mature pup just a few days old when she was picked up by some well-meaning tourists last March. She was found on the beach and thought to be abandoned by her mother.

“Seal mothers give birth on the beach and frequently leave their pups to feed. They can be gone for several hours at a time,” Olsen said. “So, people may think the pup has been abandoned, which is not always the case. Attempting to rescue what you think is an abandoned seal pup can dramatically decrease their chance of survival.”

Ravioli suffers from neurologic and balance problems due to a vestibular disorder. She had seizures and was unable to regulate her body temperature when she first arrived at the center. Because of her neurologic and balance problems, she’d be unable to hunt successfully in the wild. She weighed only 12 pounds when she first arrived at the center, but left last Friday at a full 80 pounds and 43 inches long.

Moody Gardens Biologists Maggie Reynolds and Allison Folsom traveled to Crescent City last week to work with staff and volunteers at the center and prepare the seal pups for their trip to Texas.

Last Thursday, Tomato and Ravioli were each placed in their own extra-large animal transport crates and settled in for an eight-hour road trip – via two minivans – to Portland, Ore. From there, they were loaded on a FedEx airplane, and with Reynolds and Pfeifer at their side monitoring progress, they flew via FedEx to Bush Intercontinental Airport. It was a short drive to Moody Gardens, and by the end of the day, both were at home inside the North Pacific Exhibit’s Holding Area. They will stay in the Holding Area for at least 30 days and should be on exhibit later this month.

“Tomato and Ravioli will remain in the Holding Room until they finish their 30-day quarantine. Then  we will put up the ‘Howdy’ Gate. The gate keeps the new pups separate from our other animals, but allows all of the animals to see and smell one another,” Olsen explained. “Once everyone is comfortable, Tomato and Ravioli will have the exhibit to themselves for some time so that they can get familiar with their new home. Once that’s successful, staff will introduce the new seal pups to Siku, Sam, Squirt and Porter, one at a time.”

Staff and volunteers at the Northcoast Marine Mammal Center are encouraged to not become too attached to the animals they rescue. Most times, the animals are rescued, rehabilitated and released back to the wild. Tomato and Ravioli offered a rare opportunity for an exception to this rule as they were deemed non-eligible for release.

“You can see that they’ve formed a bond. They had cared for these two pups for nearly a year,” Olsen said. “It was hard to see them leave, but they know the pups are coming to their forever home. The staff and volunteers are excited for them.”