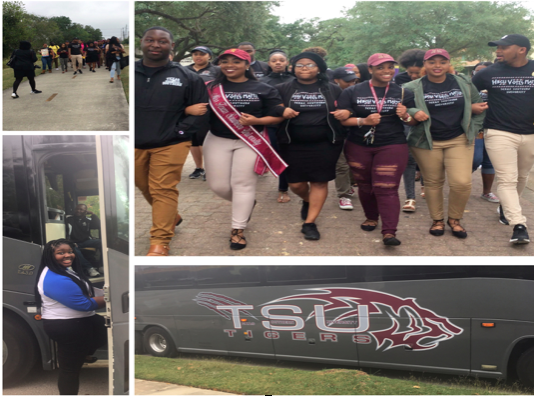 Vote or shut up! Texas Southern University students unite and urge the community to vote

The historic day was gloomy and there was an overcast that gave the sky hues of grey, however, the dull weather was no match for the fire and desire inside of the students at Texas Southern University!

Students at TSU gathered on the tiger walk as they marched down the maroon bricks their ancestors once laid. The message was to unite and urge not only the students, but the community as a whole to get out and vote.

“This is good, it’s inspiring people to get out and vote,” said Silver Ochai, a junior at TSU.

The event was organized by the student government association who provided shirts that read “HBCU Votes Matter” as they made their way to St. Mary’s Catholic Church to cast their vote for decision 2016.

In 1965, the Voting Rights Act, signed by Lyndon B. Johnson in 1965, allowed African-Americans to vote under the 15th amendment.  As we all know, African-Americans had to fight very hard for this privilege, and being that TSU is a historically black university, the importance of voting truly resonates with the student body.

Paige Hubbard, a broadcast journalism student, stressed that “My ancestors fought for this moment, and some of them did not live to see it come to fruition, I’m here today not only for myself, but for the people who shed their blood to make this possible for me.”

Nevertheless, the 2016 election hit home for Latino students as well.  Monica Delgato, a physics major, expressed how she was joyful to be a vessel for her parents. Delgato expressed that “Voting means a lot as a citizen, because my parents are immigrants, and I get to be their voice and speak for them.”

Texas Southern students proved that this rally was an opportunity to unify people of all races, religions and backgrounds, and they strayed away from focusing on the criticism of the candidates on the ballot. The clear message was to encourage people to exercise their right to vote and be a part of one of the most historic elections in history. The school even provided a charter bus to pick up and drop off students to their different polling locations to ensure everyone had this opportunity.

Regardless of the outcome of this election, we salute all of the students and members of the community that took the time out to exercise their first amendment right. Well done, tigers!