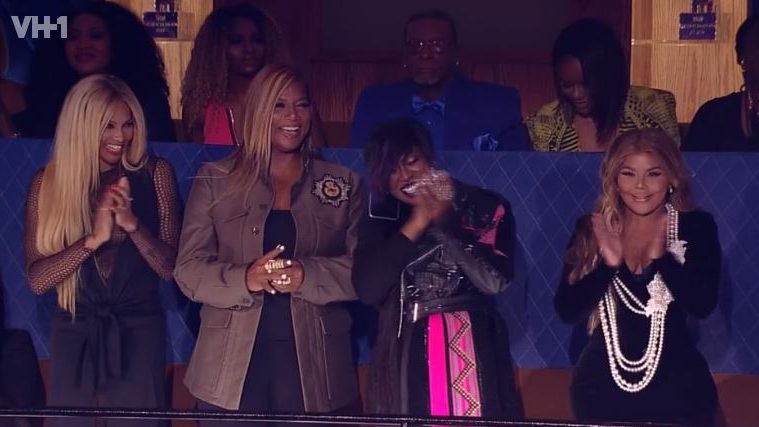 All Hail The Queens! VH1 honors women in hip-hop

When Black women and hip-hop combine in one room, something magical and enticing takes place. That is what we witnessed while watching the annual VH1 Hip-Hop Honors last Monday night.

Homage was paid to the upmost degree while artists such as Remy Ma, Teyana Taylor, KeKe Palmer and Monica showed our lady hip-hop legends some much-deserved love and appreciation for their many years of success, dedication and creativity in this music industry.

The women that were honored this year were Missy Elliott, Lil’ Kim, Queen Latifah, and Salt-N- Pepa featuring the one and only Spinderella. The show was hosted by Miss E-V-E herself.

After going on what seemed to be a hiatus, we were happy to see that Mrs. Cooper graced us with her presence and reminded everyone that “Women been hip-hop, women are hip-hop, and women will always be hip-hop,” as stated in a Rolling Stone article.

The show kicked off with Missy Elliott being honored by Remy Ma, Nelly Furtado as she surprised us singing “Getcha Freak On,” and Trina put on a great performance, reminding us that she doesn’t want a “One Minute Man.”

Remy saluted all the honorees for their contribution to hip-hop, and then went “All The Way Up” with Fat Joe.

Other artists that honored Missy included Monica with “So Gone” and Fantasia serenading the crowd with “Free Yourself.” Timbaland showed love to his sister as he congratulated her on her success in music. Missy reminded everyone of her lifelong love for the beautiful Aaliyah dedicated the honor to her best friend.

Queen Latifah participated in her epic tribute, performing Mama Morton’s “When You’re Good to Mama,” from Chicago, and then gave the crowd a treat as she performed her hit “Come Into My House” from her 1989 album All Hail The Queen. The Queen’s tribute was truly memorable as other greats like Rah Digga, Lady of Rage and YoYo joined her on stage to show love and support.

The evolution of hip-hop unfolded right before our eyes, and the unity was an incredible sight.

The men also came to honor the Queen as Naughty By Nature had everyone swinging the arms left to right with “Hip-Hop Hooray.”

Salt-N- Pepa got a lot of love for being lyrical and fashion icons in hip-hop. The trio that hailed from Queens, NY reminisced on their years of success and told the audience that years later, they still have the pleasure of selling out arenas across the nation.

R & B singer Ashanti sang “Whatta Man,” for the ladies, and KeKe Palmer and Dreezy were the perfect duo for the hit “Push It!” The dance moves took us all the way back to the late ‘80s, and had many pushing it both in the audience and in front of their televisions.

The trio’s speech focused not only on their families and success, but the problems with police brutality and racism across the country. It’s good to see these queens still using their influence for the better.

A shocker of the night was seeing Faith Evans speak highly of her once nemesis Lil’ Kim, who was honored for her contribution to music. She even made the crowd laugh as she admitted that the two used to go “toe to toe” with each other back in the day. P. Diddy surprised Kim with a cake and a speech, telling her how proud Biggie would be to see all of her accomplishments in music. She used her time during the show to not only thank God, but to thank many of the people that have supported her along the way.

The uncensored rapper also took to IG to show how proud she was of the people that honored her, including Dej Loaf, Lil’ Mama and Teyana Taylor. The colors gleamed across the stage as Dej and Lil’ Mama did “Crush on You,” and Teyana Taylor received so much praise for her identical swagger and mannerisms delivered while performing “No Time.”

French Montana, The Lox and Rich Homie Quan also came through for Kim.

And leave it to Miss Dana Owens to also show girl power as the show was closed out with some “U.N.I.T.Y.”

MC Lyte, Da Brat, Mia X, Ms. Jade, Monie Love and other “Pioneers of Hip-Hop” joined her in this effort to show that we can do anything when we stand as one. Latifah sung “Where, oh where in the world would I be without the lovely ladies standing behind me? I’m telling you they taught me how to be a queen…”

She still remains a class act even after all of these years!

We thank VH1 for crowning these queens during this phenomenal show, even though it may have taken a few years. It was definitely worth the wait!

Watch another great performance from the show!