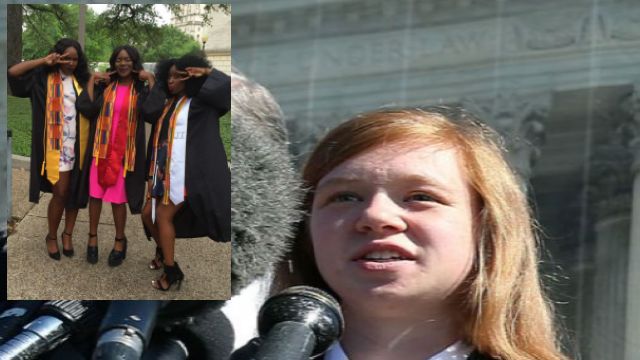 Black students and supporters took to Twitter with the hashtag #StayMadAbby to display how unbothered they were by the actions and words of Abigail Fisher and Antonin Scalia.

According to Houston Chronicle, Abigail Fisher had a 3.59 GPA and had done everything to get into the school of her dreams, University of Texas at Austin but found out she would not continue the legacy of being a Longhorn.

The Sugarland, Texas native opened a case, Fisher v. University of Texas as she felt that her 2008 denial from the university was due to her race.

The University of Texas automatically accepts all students at the top 10% of their high school class and is left with 25% to accept others based on what is called the “holistic”process that is based on race and other aspects according to motherjones.com.

According to Mother Jones, Supreme Court Justice Antonin Scalia made comments saying that:

“There are those who contend that it does not benefit African Americans to get them into the University of Texas, where they do not do well, as opposed to having them go to a less-advanced school, a slower-track school where they do well. One of the briefs pointed out that most of the black scientists in this country don’t come from schools like the University of Texas. They come from lesser schools where they do not feel that they’re being pushed ahead in classes that are too fast for them.”

Black students and many colleagues and graduates of UT  have used the hashtag #StayMadAbby to show off their achievements.

The University of Texas simply said that Fisher did not meet the requirements of admission back in 2008 but was suggested to other routes to come to the university. She denied those and attended Louisiana State University and is currently a resident of Austin.

The case’s decision should be made by June of 2016.

Read more news of Foster’s headlines on The Downtown Tea