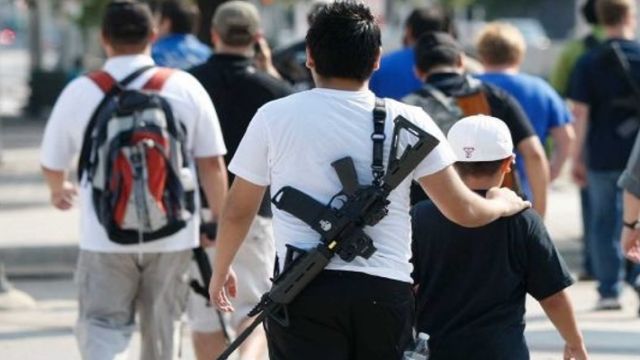 Open Carry to go into effect New Year’s Day; many businesses say “No”

On New Year’s Day, Texas will become the 45th state to allow open carry. Many establishments are preparing for the law by adding more security, while other private establishments, including college campuses are saying open carry will not be allowed.

The Galleria Mall in Houston is one of the establishments to say no. The mall’s manager Greg Noble released the following statement:

“As a private property owner, Simon will continue to enforce its existing policy of not allowing possession of any weapon units property, whether concealed or displayed openly, other than licensed weapons carried by law enforcement personnel. Once the law goes into effect, any shopper in possession of weapon will be individually notified of Simon’s existing policy by a member of the security or management team and asked to comply.”

Many businesses, including the Houston Zoo, are finding the new law threatening and have begun posting signs that state there is “No open carry on the grounds.”’ Other establishments are asking that people who choose to open carry read the signs and handle their gun with care and control in 2016.