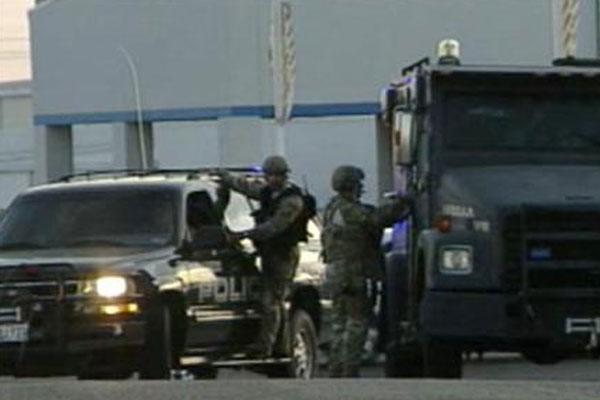 LAREDO, Texas — A desperate mother killed herself and critically shot her two children Monday after a seven-hour standoff at a welfare office in Laredo, according to police.

Investigator Joe Baeza said the mother was speaking with two employees when she pulled out a gun and demanded to speak to a supervisor around 5 p.m..

The supervisor convinced the mother to let his employees go, while he and the children — , a 10-year-old boy and a 12-year-old girl—remained behind.

About 25 other people in the social services building were moved to safety during the standoff.

Negotiators tried reasoning with the mother, but she was unwilling to surrender.   She eventually let the supervisor go around 7:45 p.m., but stayed barricaded alone with her children.

Police heard three shots fired around 11:45 p.m. and rushed in.  The mother was dead from a self-inflicted gunshot wound and her two children were clinging to life.

The children were both unconscious and rushed to the hospital in critical condition. It is not known if they will survive their injuries.

Baeza said the woman, who recently moved to Texas form Ohio, was denied food stamp benefits several months ago, and they are trying to find out what triggered her breakdown Monday.

“This wasn’t like a knee-jerk reaction,” Baeza said, adding that the woman felt she was owed restitution of some sort.

The victims’ identities have not yet been  released.

Our prayers go out to this family.