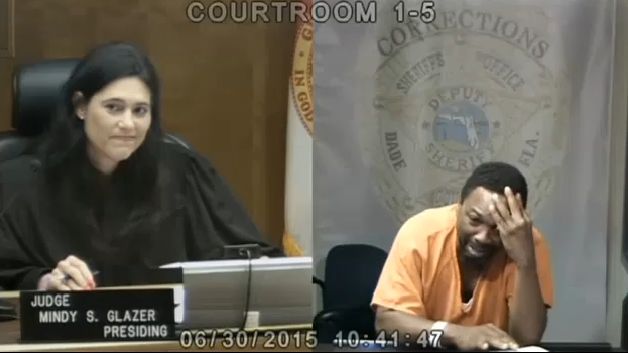 Life is about choices, not circumstances.  Because no matter the circumstance, you CHOOSE how you handle the situation.  Case and point with the story of Judge Mindy Glazer and defendant Arthur Booth.

Booth was standing before Glazer facing a number of charges, including burglary, then was reduced to tears after the two realized they were former classmates.

“Did you go to Nautilus for middle school?” Glazer asked Booth.

“Oh my goodness,” Booth said over and over, as he rubbed his head and cried.
The judge went on to say how she remembered Booth as a great kid in school, and how the two used to play together.  She expressed disappointment with seeing him now on the wrong side of the law, and hoped he would change his life.

“He was the best kid in middle school. I used to play football with him. All the kids looked up to him and look what has happened. I’m so sorry to see you there,” the judge said. “Mr. Booth, I hope you’re able to change your ways. Good luck to you.”

She then reminded them that the two of them weren’t getting any younger before setting his bond at $43,000.

Hopefully Booth will get it.  Hopefully seeing his former classmate doing so well will make him see that their is hope for his future and, hopefully, the reminder of his increasing age will make him realize that the foolishness has to stop.

We agree with your childhood friend, “Good luck to you sir,” and we sincerely hope that things will get better for you.

Choices, people.  They walked the same halls..and both ended up on opposite ends of the law.