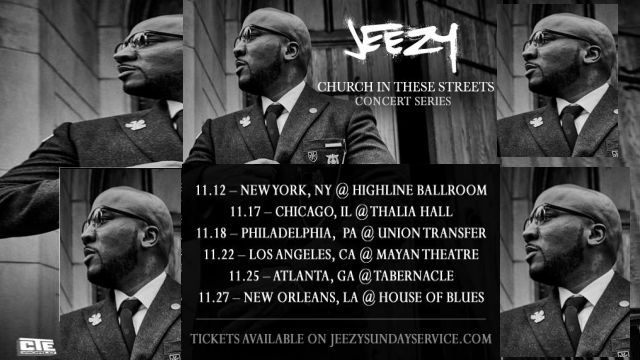 Following the release of “Sweet Life” featuring Janelle Monáe, Grammy®-nominated rap superstar JEEZY has announced a series of intimate concerts in support of his forthcoming album CHURCH IN THESE STREETS out on Friday, November 13 on CTE/Def Jam Recordings.

The concerts series, designed to give diehard fans a one-of-a-kind experience, kicks off on November 12 in New York City at the Highline Ballroom for a late night show. The series will stop in Chicago, Philadelphia, Los Angeles, New Orleans and Jeezy’s hometown of Atlanta. Tickets for these shows can be purchased at www.JeezySundayService.com.

The concert announcement arrives as Jeezy continues to drive toward the release of his sixth studio album, CHURCH IN THESE STREETS. With the album taking a strong societal and political tone, this past week Jeezy joined tens of thousands of people at the Million Man March in Washington, D.C., was a guest on Comedy Central’s “The Nightly Show with Larry Wilmore” and joined “Ebro In The Morning” on Hot 97 to discuss the content of the new album. Over the past few weeks, Jeezy initiated his successful #SundayService campaign, where each week he has released new music, videos, letters and additional content to engage fans with CHURCH IN THESE STREETS. From the menacing track “GOD” to the club rattling “Gold Bottles” and introspective “Sweet Life” featuring Janelle Monáe, each track has painted a unique picture of what’s to come from Pastor Young aka Jeezy on the new album.

To launch the CHURCH IN THESE STREETS album campaign, Jeezy released a powerful letter about the state of our society. The letter describes today’s social climate as dire, but challenges readers to pursue their dreams and become “Gods” in their own right. “We all have the ability to affect lives; to raise our sons and daughters to become Kings and Queens…To make a difference on earth while we are here,” states Jeezy.  Ending the letter on a positive note, Jeezy says “Dreams don’t expire – they just multiply.” The letter helps define the song “GOD” and the album to come as music that will acknowledge the struggle, yet push listeners to progress in their daily lives.

Over the course of his legendary career, Jeezy has sold over 5 million albums worldwide and has had multiple chart topping hits. This year marks the 10th anniversary of Jeezy’s seminal debut solo album Let’s Get It: Thug Motivation 101, which pioneered the genre of trap music.  Proving that Jeezy has immense longevity, he released his fifth studio album, SEEN IT ALL on September 2014, which was his first LP in nearly three years and marked the third #1 Soundscan debut of his career.

“Church In These Streets” Concert Dates: