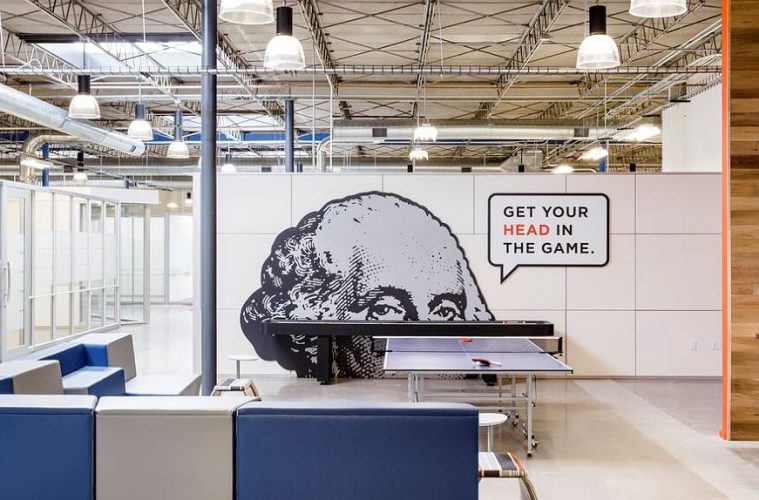 HOUSTON — Neighboring downtown Houston is the East End, a community with deep historic roots and entrepreneurship. It was in the East End that the Allen Brothers envisioned and built Harrisburg, Houston’s founding cornerstone for what has become today, the fourth largest city in the country. Almost 200 years later, this largely Hispanic community is charting a new vision: To become Houston’s primary makers hub.

Leading this effort is the Greater East End Management District (GEEMD). This master plan of Economic Development aims to create new businesses as well as retain and expand existing enterprises. The GEEMD believes that entrepreneurialism and training is the key to business creation and employment growth in their district, an area where the unemployment rate is slightly higher than the rest of Houston.

TxRx is one of the launching platforms for this new vision of the East End. Their decades old 30,000 sq ft warehouse has been converted into a creator’s dreamland where computers, 3D printers, oscilloscopes, drones and laser cutters have been accommodated into intricate fabrication workstations. Here is where creators and makers of all ages learn to code, build 3D figures, weld metal objects, create 3D computer animations and create hand-crafted jewelry.

TxRx is a nonprofit entity that was created by founder and president, Roland von Kurnatowski, who describes TxRx as a hackerspace that serves as an incubator where imaginative minds learn the technical skills to tackle everyday problems. According to Kurnatowski, proximity to downtown and being in a community that fosters creativity were the reasons to establish TxRx in the East End seventeen years ago.

Along with GEEMD’s vision, TxRx has plans to expand aggressively. Kurnatowski added, “We have an afterschool program with the local high schools which has been very successful. We are expanding this initiative into a multiyear program to accommodate more students that will be tomorrows’ entrepreneurs. Students on this entrepreneurial track learn how to fabricate products, how to sell them and convert those ideas into small businesses.”

Some professionals seeking personal satisfaction such as, David Jenesko, are drawn to TxRx. Jenesko is a visual artist who joined TxRx two years ago to expand his innate talent. A geologist by trade, Jenesko has a never-ending passion for art as well using new technology and new processes. “It’s here, where I can collaborate and bring my ideas to life,” he said. “Some of my ideas involved engineering and fabrication which is stuff they do here that I don’t have,” he added.

A more recent addition to the East End is Headquarters, a 35,000 square foot, multi-tenant facility along Canal Street that offers working space with a community feel to entrepreneurial minded millennials. Its contemporary-styled space is equipped with a game room, courtyard, 1G internet connection, meeting areas and conference rooms. Peter Licata, co-founder of Headquarters, opened up for business on February 2017. To date, 60 percent of the spaces have been leased by professionals in graphic design, web technology and PR. According to Licata, proximity to downtown, plenty of parking spaces and an existing warehouse were the deciding factors to establish Headquarters in the East End neighborhood.

Public Investment in Youth and Education

In addition to the growth of entrepreneurism, more traditional investments are being made in the East End. This includes the recently completed expansion of the Houston Community College Southeast Campus which added a new 36,000 sq ft facility bringing state-of-the-art STEM education to the area. This new facility includes a lab and classroom spaces, a Maritime Center, lounge, library and a telescope that will be part of an astronomy curriculum.

Moreover, a new and improved Milby High School, is slated to open this summer. The three-story $69 million project is a combination of new construction as well as renovations of a modern learning environment to accommodate over 2,000 students. The building will feature new academic wings erected to the north and south of the main building, each including learning spaces for science and engineering labs, welding, and the culinary arts program, which will include a student-run café.

The Houston Independent School District broke ground late last year on the new location of the High School for Law and Justice (formerly High School for Law Enforcement and Criminal Justice) to be located on Scott Street between Pease and Coyle. The $40 million facility will feature a new three-story building that combines a 21st-century learning environment with a realistic courtroom, crime-scene investigations lab, and emergency communications center.

Financial institutions are also keeping up with the growth in the East End. Frost Bank, a long time financial center in the East End is factoring the projected long term growth and building a new branch at The Shops On Navigation, a recently completed retail space of 17,953 sq ft located on the intersection of Navigation Blvd. and Canal St. According to Jennifer Rosow Jaroszewski, Vice President of Marketing at Frost Bank, “We look for growth areas, and the Houston region has more financial centers than any of Frost’s other regions. One of our strategic initiatives is to increase the amount of loans in our portfolio of all sizes, and we believe that opening financial centers in areas where people live and have businesses is a key way to accomplish that.”

All of this new development and investment in training and education is expected to shift the center of gravity making the East End a hub for creative minds of entrepreneurs to grow and evolve. The recently appointed President of the Greater East End Management District, Veronica Chapa-Gorczynski, is leading the transformation of the East End. She comments, “The East End is poised to be a highly desired destination to new businesses. The management district will continue to foster relationships with banks and other strategic partners to support entrepreneurs.” The GEEMD is responsible for infrastructure improvements, beautification, public safety, and workforce development in the East End.

The Greater East End Management District was founded in 1999. Its mission is to revitalize the infrastructure and image of the District, to attract more businesses and to increase economic activity in the area. Improvements include new infrastructure, beautification, security and public safety, and workforce development. The Greater East End Management District covers 16 square miles and borders Clinton Drive to the north, Loop 610 to the east, Telephone Road and Interstate 45 to the south and the Houston