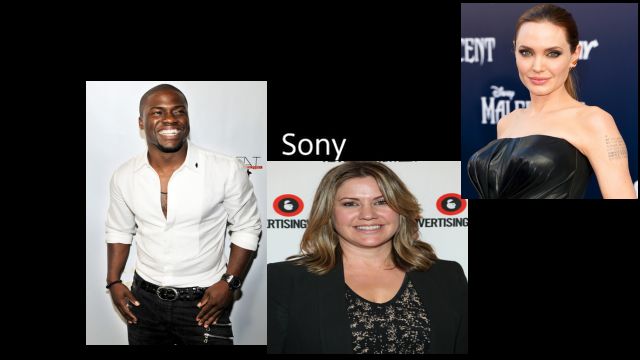 Here’s what they think about ya: Hacked e-mails reveal Sony execs calling Angelina a ‘brat’ & Kevin a ‘whore’

There are some red faces and bruised egos in Hollywood after a hacker leaked private e-mails between Sony executives.

Let’s face it, with Big Brother always watching nothing really is “private” anymore — heck, pillow talk is sometimes recorded– so it would be smart to not say anything negative about someone over e-mail unless you don’t mind the risk of it one day going public.

Such is the case with Sony Pictures Entertainment.  Their camp has been infiltrated –and by that we mean hacked — by a group calling themselves “The Guardians of Peace.”

Now, the e-mails are out for the public to see and a number of media outlets have combed through them and have broken down some of the messiness.

Gawker published e-mails surrounding a spat over the production of the Steve Jobs biopic.  Angelina Jolie apparently wanted director David Fincher to direct her movie on Cleopatra, rather than the film about the late Apple founder.  Emails between Sony Pictures co-chairman Amy Pascal and Scott Rudin, the producer who brought the Jobs biopic to Sony, shows Rudin not backing down on letting Jolie win, even calling her a “minimally talented spoiled brat.”

“She’s a camp event and a celebrity and that’s all and the last thing anybody needs is to make a giant bomb with her that any fool could see coming,” writes Rudin.

Pascal, studio exec Clint Culpepper and Sony Entertainment CEO Michael Lynton also apparently went in on comedian Kevin Hart, who wanted to get paid more money than they felt he deserved to Tweet about the movie, “Think Like a Man Too,” which he was starring in.  Sony felt the $3 million they were paying him was enough.

“It’s not as if we paid him 3M and 4M respectively for his last 2 films thinking he might be nominated. We paid for his ability to open a film which included his social media savvy. I feel like this is something that should be negotiated going into the film as opposed to after the fact. It feels tantamount to buying a car and then upon picking it up being told that the engine will cost extra. I’m tempted to suggest we call his bluff. If he doesn’t do his normal routine, his film will not open as well and his brand will appear diminished and he will- in fact – be fucking himself because we have his next 2 immediate films. And then there’s the social media precedent we’re setting…especially in light of the fact that Channing is at the same agency,” Culpepper wrote.

Oh yeah, and they also called Hart a “whore.”

This is all too hilarious, and in the words of Ice Cube, “Here’s what they think about ya.”

But yes, in defense of Kevin Hart, Tweets and other social media endorsements are worth MONEY when you have a large following and influence.  #Jus’ sayin’

There is PLENTY more emails about damn near everyone, including Leonardo DiCaprio and Christian Bale.  Check out Gawker.com to see the juicy stuff.