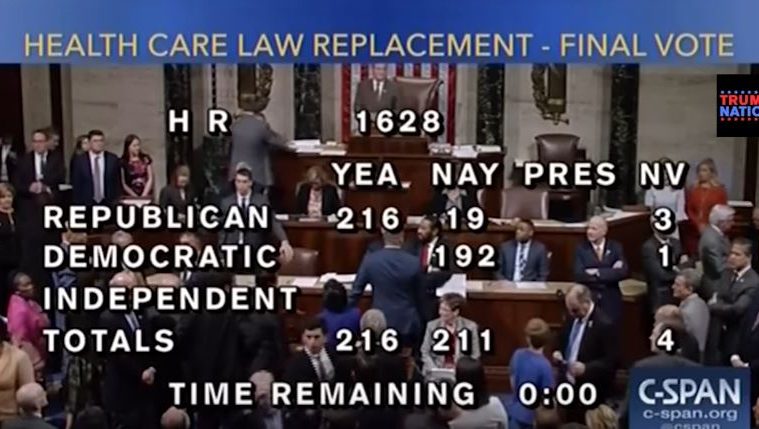 Explanation please? The Affordable Health Care Act heads to the Senate; Democrats break out into song [MUST WATCH]

Not exactly what you might expect on the Senate floor, but then again…nothing in the political arena has been “the norm” as of late. On Thursday morning, the House voted 217 -213 to change parts of the Affordable Care Act using a different approach to the nation’s health care system. The next stop for the bill is the Senate.

In order for the bill to qualify, the Republicans would need 50 votes in the Senate, however four GOP senators have already expressed opposition Medicaid coverage made under Obamacare.

CNN reports, the bill is now heading to the Senate where it faces daunting challenges because of the same ideological splits between conservative and moderate Republicans that nearly killed it in the House.

Trump on health care bill: Premiums will come down Trump said he is confident the bill will pass the Senate, calling Obamacare “essentially dead.”

“This is a great plan. I actually think it will get even better. This is a repeal and replace of Obamacare. Make no mistake about it,” Trump said at a celebratory White House appearance with House Republicans.

After a dramatic week of negotiations, lobbying from Trump and Republican leaders, the vote ended with 217 GOP lawmakers backing the measure. Twenty Republicans opposed it, as did all House Democrats.

While this is a win for the Republicans, the Democrats are more than confident that the bill will not pass. After the close vote, they broke out into song singing Na Na Na Na, Hey Hey Hey, Goodbye.”

According to multiple reporters on Twitter, the chant did not come from House Republicans celebrating the bill passage, but from Democrats signaling their belief that the vote will help cost the Republicans their seats in the midterms.