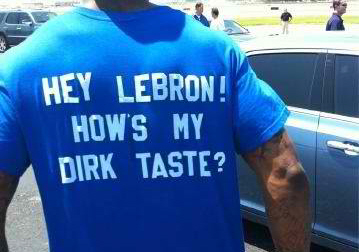 DeShawn to LeBron after win: ‘How’s My Dirk Taste?’

Boys will be boys, especially when it comes to talking trash on and off the court.  Dallas Mavericks guard DeShawn Stevenson lets it rip after his team took top prize, winning the 2011 NBA championship.  He extended his feud with Miami Heat forward Lebron James by wearing a t-shirt which read, “Hey LeBron! How’s my Dirk Taste?”

According to cbssports.com, the Mavericks closed out the series on Sunday night with a 105-95 win in Game 6 before taking to South Beach club LIV to celebrate with the Larry O’Brien trophy.

On Monday, the Mavericks flew home to Dallas, where Stevenson was spotted wearing a Mavericks blue and white t-shirt poking fun at “King James”.

That slogan is an obvious reference to a Shaquille O’Neal freestyle rap. O’Neal used the line, “Hey Kobe, tell me how my a** taste” to mock his former teammate with the Los Angeles Lakers, Kobe Bryant.

To add a play on teammate Dirk Nowitzki’s name here is incredibly inspired work from Stevenson, who may well have created a legacy for himself as “The Guy Who Got into LeBron’s Head Completely” in these 2011 NBA Finals, according to cbssports.com.

The most underrated part of this shirt is that it bears the sponsorship of HDNet, Dallas Mavericks owner Mark Cuban’s television station. It’s almost like Cuban is personally endorsing the joke.

The shirt seems to be a big talker and is lighting up message boards among cyberspace.  But one commenter on TMZ.com said that’s not the reason for the shirt.

“Get you story straight! That shirt is in response to Lebron tweeting “Feeling kinda sick today. I hope I don’t choke on some **** er Dirk tomorrow” that is why the shirt says what it does!” said TMZ commenter Royce.

OK gentlemen, can we all just get along?