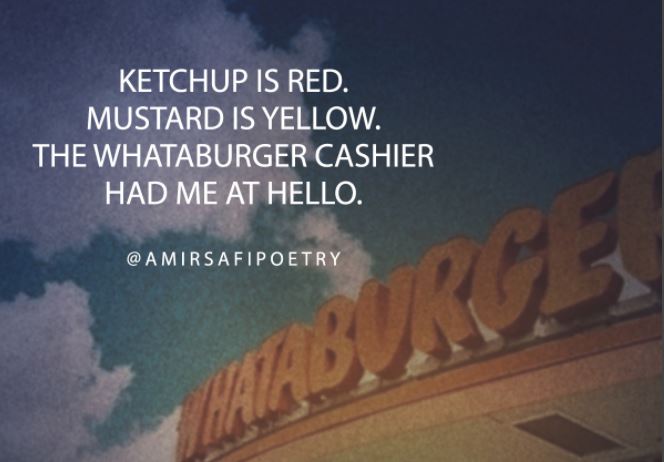 Bring on your epic Whataburger poetry for #BurgerVerseContest

SAN ANTONIO – In honor of National Burger Month in May, Whataburger is calling fans to participate in the #BurgerVerseContest poetry contest. Rhymers and rappers alike will submit their best Whataburger poetry for the chance to win a moment of fame on Whataburger’s social media channels, free Whataburger for a Year and a $500 Ticketmaster gift card.

The company has seen a variety of Whataburger-inspired art over the years, from Whataburger odes to Honey Butter Chicken Biscuit songs and even tattoos, which sparked the idea for the poetry contest.

Here’s how the contest works:

• For three weeks beginning May 3, fans and poets alike can share their Whataburger-inspired poems (70 words max) on Whataburger’s Facebook, Twitter and Instagram channels
• Poems will be judged based on originality, tone and whether the poem meets submission guidelines outlined below
• Each week during the contest, Whataburger will share three of the best poems as Whataburger-branded graphics on their social media channels and ask fans to vote for their favorite
• Each weekly winner will receive free Whataburger for a Year and a $500 gift card to Ticketmaster so winners can select concert tickets of their choice
• Visit Whataburger.com for full contest rules and more information

“When we were deciding how we wanted to celebrate National Burger Month, we discussed all of the impressive social media content our customers have submitted over the years,” said Pam Cox, Vice President of Communications for Whataburger. “The #BurgerVerseContest was born! It’s our way of encouraging more of that creativity and rewarding our customers for their loyalty. We can’t wait to see what our fans submit!”

ABOUT WHATABURGER:
Whataburger has focused on its fresh, made-to-order burgers and friendly customer service since 1950 when Harmon Dobson opened the first Whataburger as a small roadside burger stand in Corpus Christi, Texas. Dobson gave his restaurant a name he hoped to hear customers say every time they took a bite of his made-to-order burgers: “What a burger!” Within the first week, people lined up around the block for his 25 cent, 100 percent beef burgers served on five-inch buns. Today, the company is headquartered in San Antonio, Texas, with more than 800 locations in 10 states with sales of more than $2 billion annually. Visit www.whataburger.com for more information.