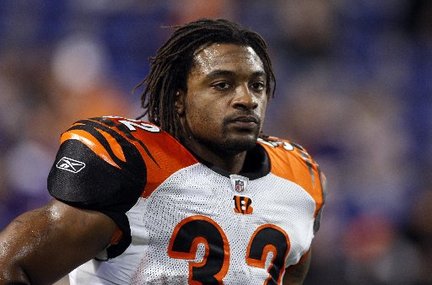 AUSTIN, Texas—Cincinnati running back Cedric Benson has turned himself in to a Texas jail to serve a 20-day jail term for two misdemeanor assault cases.

The former University of Texas star was sentenced in Austin Monday and booked into jail late Tuesday, according to the Associated Press.

It was initially thought Benson would surrender Oct. 17 during Cincinnati’s bye week, but he went in sooner than expected.

He could also be released earlier than expected if he receives credit for time served.

It appears the 28-year-old has a problem keeping his hands to himself.  He was arrested last year for allegedly punching a bar employee and pleaded no contest to assault with injury on that charge.

Then he was arrested again last month for punching an ex-roommate.

Benson pleaded no contest to assault with bodily injury with family violence. That case could be dismissed if Benson does 30 hours of community service and pays restitution.

How about a few “anger management” classes?  Ya think?