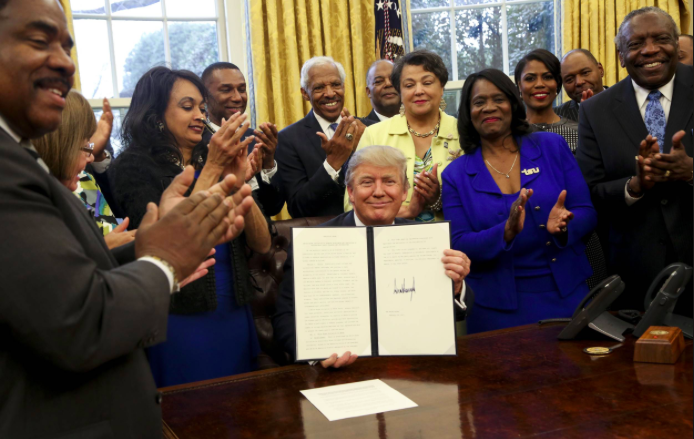 Historically black college presidents who met with Donald Trump feel like they were played. You guessed it– They apparently did not get much from that meeting. The meeting, which took place last month, sparked outrage on social media amongst African Americans who felt that the meeting was a slap in the face.

According to balleralert.com, Morehouse College President John Wilson Jr. released a statement on Thursday regarding his sentiment. They spent two days along Trump and other fellow HBCU presidents to discuss the HBCU executive order. The presidents of the universities went in with high hopes that meeting with Trump would mean doing good for the universities, but instead got an Instagram photo.

They say that they were going by Trump’s word in his promise to “do more for HBCU’s than any other president has done before, something that was regarded as major since former President Barack Obama invested $3 million into the schools.

Since then, nothing has been accomplished, and the presidents have become a laughing stock in the black community.

To The Morehouse College Community:

I spent the last two days in meetings at the White House and on Capitol Hill. As some of you may know, all HBCU presidents were invited to a dialogue with President Trump and his new administration about support for HBCUs. Most of the 104 HBCU presidents attended, including all presidents from the Georgia-based HBCUs.

Many had high hopes about this meeting. There was much advance chatter about it being “historic,” and there were many signals from key Trump administration officials that they would surprise HBCUs with favorable treatment. Given my experience in the Obama administration, I knew this would require an extraordinary announcement. Why? Because I knew that President Obama had invested $3 billion more in HBCUs in his first six years than President Bush invested in his final six years. Therefore, since President Trump pledged to “do more for HBCUs than any other president has done before,” we could have reasonably expected him to get started by announcing at least an additional $500 million to HBCUs…this year! And beside the expectation of new funding, there was advance talk of changes like an aspirational goal of 5 to 10 percent for federal agency funding to HBCUs, a special HBCU innovation fund, large boosts in Pell Grant and Title III funding, and extra tax breaks for those in the private sector who contribute to HBCUs. But, instead of the long-awaited executive order containing or signaling any of those outcomes, the key change is a symbolic shift of the White House HBCU Initiative from the Department of Education to the White House. It is not possible to measure the impact of this gesture anytime soon, if ever.

It should also be noted that, in her luncheon speech to HBCU presidents yesterday, Education Secretary DeVos struck a discordant note when she said of HBCUs, “They started from the fact that there were too many students in America who did not have equal access to education. They saw that the system wasn’t working, that there was an absence of opportunity, so they took it upon themselves to provide the solution. HBCUs are real pioneers when it comes to school choice.”

But HBCUs were not created because the 4 million newly freed blacks were unhappy with the choices they had. They were created because they had no choices at all. That is not just a very important distinction, it is profoundly important. Why? Because, if one does not understand the crippling and extended horrors of slavery, then how can one really understand the subsequent history and struggle of African Americans, or the current necessities and imperatives that grow out of that history and struggle?

Slavery has a long shadow and the school choice debate was not at all alive under the menacing loom of that shadow at emancipation! So, Secretary DeVos misstated that, but that does not mean she should be diminished or dismissed. From listening to her carefully for the last two days, I get the strong sense that

she wants to get this job right. She should still have that chance. Only time will tell how much true support this administration will provide to HBCUs.

In general, the meetings were a troubling beginning to what must be a productive relationship. Trust that the HBCU community will continue to press for the kind of funding that educational excellence and national competitiveness require!

What do you think of this situation?