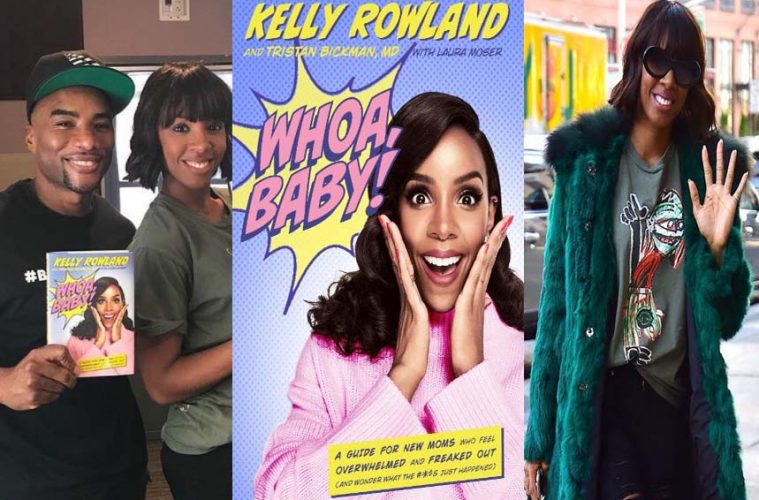 HOUSTON — Houston’s own multi-talented recording artist, actress and executive producer Kelly Rowland has officially added “author” to her long list of accomplishments with the release of her debut book, Whoa, Baby!: A Guide for New Moms Who Feel Overwhelmed and Freaked Out (And Wonder What the #*@& Just Happened).

The book is co-authored by her personal OB-GYN, Dr. Tristan Emily Bickman, and published by Da Capo Lifelong Books.

“Dr. Bickman and I wanted to create an answer to what to expect after childbirth. No one told me what to expect physically, emotionally, or mentally,” Rowland said. “The purpose of Whoa, Baby! is to comfort the mother and give her knowledge of what’s going on with her. We cover everything!”

2017 is gearing up to be a very busy year for the original “Destiny’s Child” songstress.

Rowland just had a stint in Sydney, Australia where she’s filming season 6 of The Voice (Australia). In addition to keeping fans excited with her “Best Dressed” features in Vogue, W, Essence and E!, to name a few, Rowland will also be launching a beauty brand, F.A.C.E: For All Created Equal, as well as upcoming new music. There is no stopping this gorgeous mom who continues to break barriers and push the envelope when it comes to her creative passion.

When Kelly gave birth to her son Titan, it was love at first sight but she was also a little freaked out about what happened to her body—not to mention the overwhelming new thoughts and emotions. In Whoa, Baby!, Rowland and her OB-GYN Dr. Bickman team up to cover everything a first-time mom needs to know: the gross physical stuff, the hormonal and emotional stuff, and the just plain weird stuff. Whoa, Baby! is often hilarious and always honest and down-to-earth. From falling asleep with the pump on to swollen legs and lack of sleep, Rowland and Dr. Bickman cover every surprising challenge that new moms face.

Kelly Rowland is a 4-time Grammy Award winner singer, songwriter, actress and executive producer. A global pop star since the age of 16, Kelly grew up in the spotlight as a member of Destiny’s Child, one of the best-selling groups of all time. The groups awe-inspiring list of chart toppers include 4 No. 1 singles in the U.S. and more than 60 million albums sold worldwide. Kelly Rowland has blossomed into a stunning solo artist who has released four successful studio albums, which have topped music charts all over the world. Kelly’s beautiful voice and effervescent personality have not only garnered her critical and commercial success in the music arena, but her movie star good looks, unique style and limitless drive have also generated numerous opportunities in television, film and fashion. Kelly has guest starred on several hit sitcoms including “Girlfriends”, “Empire” & “Being Mary Jane”. Her undeniable on-screen presence led television impresario Simon Cowell to tap her as a judge for the immensely popular shows, The X Factor (UK 2011) and the US version of The X Factor (2013). Kelly also added a new title to her name as Executive Producer of her very own docu-series, “Chasing Destiny” which premiered April 2016. Her versatility doesn’t stop with recording music and acting, in 2015 Kelly positioned herself as a national spokesperson for numerous powerhouse brands including Caress, Claritin, Cadillac and many more. Although Kelly Rowland has a long list of accomplishments and accolades she shows no signs of slowing down!