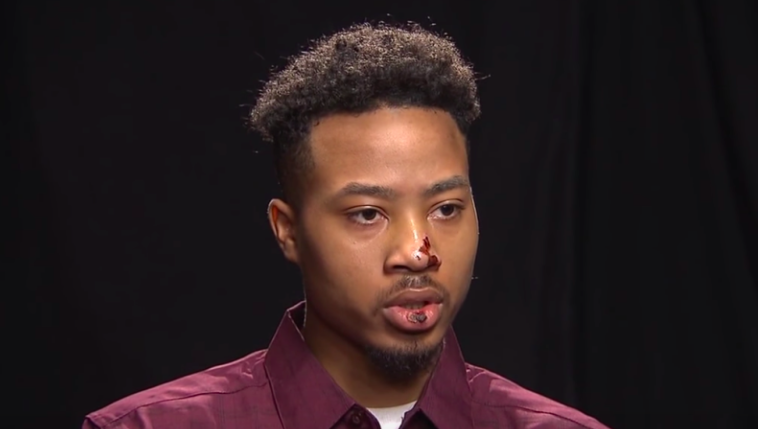 “Protect and serve” is a part of the of the police oath that some cops only use selectively, and lately it doesn’t seem like they are protecting and serving African American males— we have been seeing them more like beating these men, or worse. Last week, a video went viral as 21-year-old Demetrius Hollins was pulled over for a traffic stop in Gwinnett County, GA, but soon became a punching bag for the two police officers that pulled him over. Both officers have since been fired, however, that does not ease the pain nor erase the traumatic experience that Hollins encounter. He is now speaking out and explaining why he feared for his life.

According to a police report, the incident began when Officer Michael Bongiovanni pulled Hollins over for not having a license plate. Hollins told CNN that the license plate was in the rear window. He also stated that he recognized Bongiovanni from a previous traffic stop that took place back in August 2016. “That’s when I reached for my phone” said Hollins.

“[Bongiovanni] started yelling at me and saying that I’m not going to get video of this, ‘You’re not going to make any phone calls, nobody is going to know about this,'” Hollins said. The officer ordered Hollins out of the car and nearby witnesses recorded the incident with their cellphone and posted the videos to social media. The video captured shows Hollins getting out of the car with his hands up only for Bongiovanni to punch him in the face.

“I tried to let him know I didn’t have anything where I could hurt him and, of course, me getting out with my hands up, that means basically I’m surrendering,” Hollins said. The (then officer) wrote in his police report that Hollins resisted arrest, saying “Hollins refused to place his hands behind his back, spun around and began to actively resist arrest by bending at the waist and trying to push me away.” None of the videos from witnesses show Hollins resisting arrest or pushing Bongiovanni in any way and the reports do not mention that Bongiovanni struck Hollins in the face.

Hollins was shocked with a taser that caused him to fall to his knees only to be kicked by another officer at the time, Robert McDonald. “After I got my hands up and [Bongiovanni] hit me, that’s when he stepped back and Tased me in the back,” Hollins said. “I fell to the ground and then that’s when it stopped. The taser stopped and that’s when he just did it again.”

The police department has since opened a criminal investigation against both former policemen, as well as tossed out Hollins’ case along with 88 other cases that Bongiovanni and McDonald were tied to.