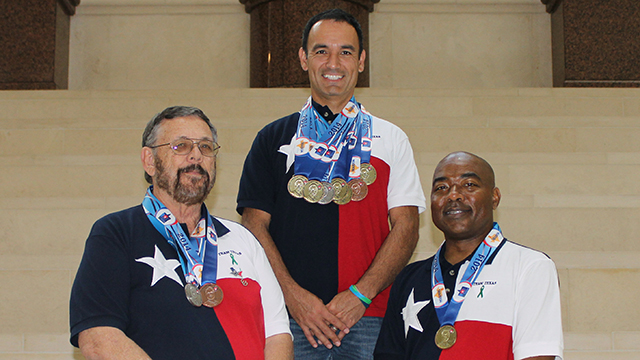 HOUSTON – The Transplant Center at Memorial Hermann-Texas Medical Center (TMC) is honored to congratulate three of the hospital’s former transplant patients who participated and received medals in the 2014 Transplant Games of America, which recently took place in Houston.

Liver transplant patient Richard Eaton, 69, won a silver medal in racquetball and a bronze medal in Badminton. While on a business trip to Seattle in 2004, Eaton began coughing up blood and was later told he needed a new liver, which he received in August 2008.

Kidney transplant patient Farand Scott, 45, also won a gold medal, along with Ruben, in the 4 x 100-meter relay. Scott ran track competitively during his years in the U.S. Marine Corps before discovering he needed a kidney transplant in late 2006. Three years later he received a new kidney, following a heart valve replacement in 2008.

The Transplant Games of America are a multi-sport competition for men and women who have undergone life-saving transplant surgeries. The Games celebrate the lives of organ donors and recipients while highlighting the importance of organ donation. To learn more about organ donation, please visit the Donate Life Texas website.

As a regional and national leader in the field of transplantation, the experienced physicians and staff at the Transplant Center at Memorial Hermann-TMC provide state-of-the-art, compassionate, multidisciplinary care to adult and pediatric patients with end stage liver, kidney, pancreas, and heart disease. Together, the Center’s surgeons have performed over 1,300 liver transplants and 900 kidney transplants on adult and pediatric patients. Memorial Hermann-TMC is ranked as one of the top 50 hospitals in the nation for nephrology by U.S News & World Report.