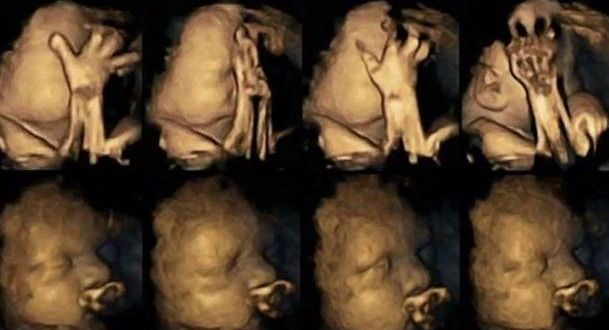 Ultrasound of fetus shows why moms should STOP SMOKING during pregnancy

If you ever needed anymore proof to show that SMOKING WHILE PREGNANT IS HARMFUL TO YOUR FETUS, please check out the study below:  But of course, smoking moms will still find a way to puff while making excuses.

The harmful effects of smoking during pregnancy may be reflected in the facial movements of mothers’ unborn babies, new research has suggested.

Researchers at Durham and Lancaster universities said the findings of their pilot study added weight to existing evidence that smoking is harmful to fetuses as they develop in the womb and warranted further investigation.

Observing 4-d ultrasound scans, the researchers found that fetuses whose mothers were smokers showed a significantly higher rate of mouth movements than the normal declining rate of movements expected in a fetus during pregnancy.

“Our findings concur with others that stress and depression have a significant impact on fetal movements, and need to be controlled for, but additionally these results point to the fact that nicotine exposure per se has an effect on fetal development over and above the effects of stress and depression,” said Dr. Nadja Reissland, Durham University’s Department of Psychology.

The researchers suggested that the reason for this might be that the fetal central nervous system, which controls movements in general and facial movements in particular did not develop at the same rate and in the same manner as in fetuses of mothers who did not smoke during pregnancy.

Previous studies have reported a delay in relation to speech processing abilities in infants exposed to smoking during pregnancy, the researchers added.

The researchers observed 80 4-d ultrasound scans of 20 fetuses, to assess subtle mouth and touch movements. Scans were taken at four different intervals between 24 and 36 weeks of pregnancy.

Four of the fetuses belonged to mothers who smoked an average of 14 cigarettes per day, while the remaining 16 fetuses were being carried by mothers who were non-smokers. All fetuses were clinically assessed and were healthy when born.

In common with other studies, the research also showed that maternal stress and depression have a significant impact on fetal movements, but that the increase in mouth and touch movements was even higher in babies whose mothers smoked.

The study also found some evidence of a bigger delay in the reduction of facial touching by fetuses whose mothers smoked, compared to the fetuses of non-smokers, but the researchers said this delay was less significant.

See the disturbing ultrasound video below, then read the rest of the study published on Durham University’s website.