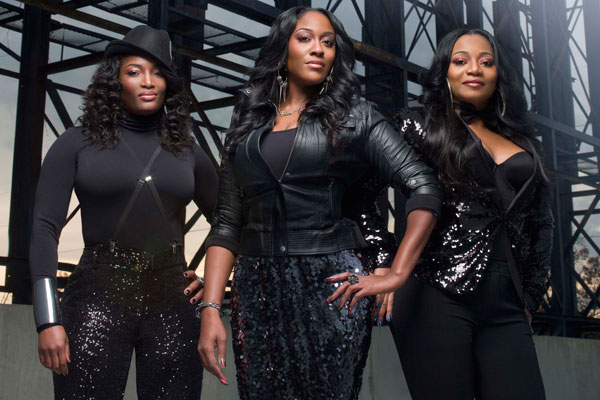 SWV back together again on new WE tv series, ‘SWV REUNITED’

NEW YORK – The ‘90s R&B trio, SWV, is back with a vengeance! WE tv announced the addition of the new docu-series to the network’s hot explosive Thursday night line-up. The show, premiering Thursday, January 16 at 10PM ET/PT with six, one-hour episodes, SWV REUNITED follows Grammy® nominated Sisters With Voices (SWV) during their make-it-or-break-it comeback tour.

In the ‘90s, the ladies of SWV—Cheryl “Coko” Clemons, Leanne “Lelee” Lyons and Tamara “Taj” George—were on top of the music world. From the streets of New York to superstardom, they had a string of top ten R&B hits including “I’m So Into You,” “Right Here,” “Downtown,” “Weak,” and “You’re Always On My Mind.” With over 15 million albums sold, a Grammy® nomination, an American Music Award nomination and 11 Billboard Music Awards nominations, SWV was unstoppable. But while they seemed to have it all, the drama behind the scenes tore the group apart. It didn’t just end, it ended badly; and in 1998 the members of SWV went their separate ways.

After marriage, kids and other endeavors, the trio decided it was time to reunite for a chance to recapture their fame. 1n 2012, their sultry sound was introduced to a whole new generation of fans with fifth studio album I Missed Us, which earned a Grammy® nod in 2013 for “Best Traditional R&B Performance.” SWV REUNITED follows these three strong and talented women as they figure out how to trust again—on and off the stage—and perform with each other. The premiere episode follows SWV on the first stop of the comeback tour at Wembley Stadium in London, but new secrets about Coko’s health threaten the rehabilitated bond of the group. Throughout the season, SWV fans will get to see the ladies in action during high-stakes performances in Atlanta, D.C., L.A., and New York. Coko, Lelee and Taj not only address old wounds like trust, jealousy, egos and selfishness, but face new challenges including health scares, family issues and management drama. And although they share plenty of tears, the ladies share lots of laughter—whether it’s poking fun at Lelee’s butt lift, Coko’s tummy tuck or sharing hilarious behind-the-scenes stories from their early years. Can the ladies of SWV finally come to terms with the issues that ended their friendship and career once before? Will they be able to put their differences aside to recapture fame?

GET MORE SWV REUNITED AT WEtv.com

For more information on SWV REUNITED go to WEtv.com and find sneak peeks, exclusive blogs, deleted scenes, photos, polls and more! Like us on Facebook, follow @WEtv on Twitter (hashtag: #SWV) and check us out on Instagram (IG: @WEtv) for inside information and special giveaways.

SWV REUNITED is produced for WE tv by Entertainment One Television, executive produced by Tara Long, John Morayniss, Jeff Hervert, Howie Miller and Jennifer Lane. Lauren P. Gellert and Kate Farrell serve as the executive producers for WE tv.