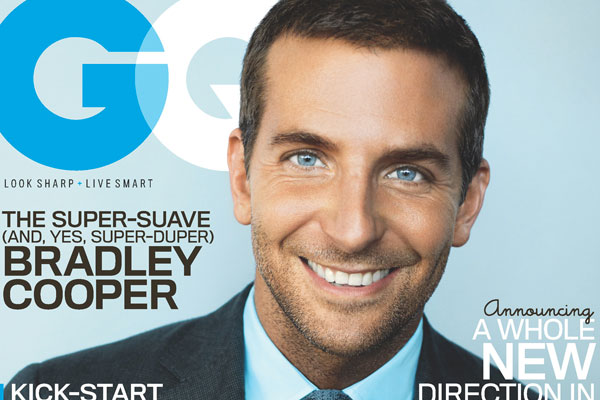 “American Hustle” star Bradley Cooper appears on the cover of the January 2014 issue of GQ. Staff writer Zach Baron spent time with Cooper in Hawaii, where he was photographed for the magazine’s Spring Style Preview, and discussed the ups & downs of his career — from battles with drugs & alcohol to being nominated for an Oscar for his role in last year’s “Silver Linings Playbook.” On being nominated, the actor says, “Did I want to win it? I never thought that I would ever win it. So it wasn’t even a question of that.”

Check out excerpts from the interview from GQ.com:

— Cooper, on being nominated for an Oscar for his role in last year’s “Silver Linings Playbook”:

“Did I want to win it? I never thought that I would ever win it. So it wasn’t even a question of that.”

—on his first encounter with Milton’s “Paradise Lost”:

“Milton, bro? Milton. Fuckin’—that was the end of it. Motherfucker’s 57 or whatever, blind, dictating it to his fucking daughter-nurse—Paradise Lost? I mean, I just couldn’t… That poem fucking killed me. Satan? That character was un-fucking-believable. I could taste him in my mouth, dude, reading that. I really, really, for some reason, connected with that poem.”

—on his role on the show “Alias,” which nearly ended Cooper’s career before it began:

“I would only work three days a week. And then for the second season, I got even more sidelined. I was like, ‘Ugh.’ And then next thing you know, I was like, ‘I want to fucking kill myself.’ ” So against the advice of nearly every single person he knew, and despite having exactly zero future jobs lined up, he asked to be written off the show. “J.J. was like, ‘Okay.’ He probably would’ve fired me, anyway.”

—on getting sober after a bad run with drugs & alcohol:

“if I continued it, I was really going to sabotage my whole life.”

—on whether or not it affected his work:

GQ: So it was more of a personal thing—it wasn’t like work was getting fucked up?

Cooper: “No, I think work was getting fucked up.”

Cooper: “In the way that if—the one thing that I’ve learned in life is the best thing I can do is embrace who I am and then do that to the fullest extent, and then whatever happens, happens. The more steps I do to not do that, the farther I am away from fulfilling any potential I would have. So the answer to that question, then, is: Yes, of course it hindered the work.”

—on his work after getting sober:

“I was doing these movies, and I got to meet Sandra Bullock and meet these people and work with them. And I’m sober, and I’m like, ‘Oh, I’m actually myself. And I don’t have to put on this air to be somebody else, and this person still wants to work with me? Oh, what the fuck is that about?’ I was rediscovering myself in this workplace, and it was wonderful.”

He pauses. “Now, in the back of my head, or in a place of my heart of, like, creativity, did I feel utterly fulfilled? Absolutely not. But I was grateful and happy to be working, and filling that void in smaller moments.”

—Amy Adams on Cooper being seen as a frat boy:

“I’ve just never seen him as a frat boy,” Adams says. “I understand how people could perceive that. But he’s a very soulful person, a very open person. I think that people can mistake a sort of laid-back quality for that frat thing.”

—David O. Russell on why he casted Cooper for “Silver Linings Playbook”:

“He was to me a palpably angry person in Wedding Crashers,” Russell says. “And then when I met him, his answer when I said that to him revealed so much dimension and depth from him as a human being. [Cooper] said how he had been someone who was thirty pounds heavier. He had been someone who tended to be not as happy. He had used sarcasm or anger to hide behind some of his fear. He was more afraid and less happy, so he had used that bristliness to hide that. Which was such an amazing answer that I just felt a real soul connection to the person, you know?”