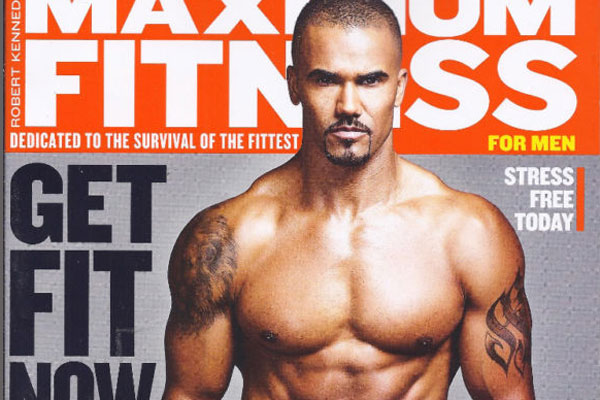 Take these evil thoughts out of my head

Or whatever you need to say to get you through these photos.  Mr. “Best Abs in Hollywood,” Shemar Moore, is the jaw-dropping cover of the latest edition of Maximum Fitness Magazine.

The Criminal Minds star, who stole our hearts as Malcolm in the “Young and the Restless,” talks about his commitment to fitness and his near-death experience; but I am so sorry I could not concentrate on a single piece of text on the page because of the photos.  (And I am supposed to be a professional!)

But seriously, any red-blooded female in America can understand the sweat on the brow, the racing heart and the bad (but really good) thoughts this man can conjure inside a woman.

On a more serious note (back to professionalism) Moore talks about the day he came close to losing his life. He sat down and gave a very candid interview with the magazine for their July / August 2011 issue.

The following excerpt was taken from Maximum Fitness Magazine.

Check out a couple of photos from the shoot:

After cheating death and making it big, Shemar Moore is the same game man he’s always been. Now, you can learn from his commitment and drive to look strong and lean—if you’re willing to endure the pain.

Shemar Moore can fly. On August 1, 2009, Moore took to the skies and was weightless—for about three seconds—with all the grace of the ill-fated dodo. “It was the scariest moment of my life,” says the star of the CBS hit drama Criminal Minds. But what could launch the six-foot-tall former fitness cover model, daytime heartthrob, host of Soul Train and door-smashing TV FBI agent so perilously, ultimately leaving him fearful for his life? An unstoppable 3,000-pound metal behemoth. This wasn’t the first scene of an independent science fiction script with as much chance of catching your attention as Gigli 2; this was the scene that Moore faced on a day that began like many others.

“On that day, I did everything right,” Moore tells me when we have a chance to sit down and talk on the set of his Maximum Fitness cover shoot. “What went wrong was that I got hit by a 70-year-old in an old-school Cadillac going 40 miles per hour!” He goes on to explain that he was out cycling at the time, which isn’t uncommon for the actor, who is well versed in most athletic pursuits and has recently been racing in charity cycling events for multiple sclerosis—a topic that hits very close to home since his mother is suffering from the disease.

“I didn’t see him or hear him coming—not a thing,” says Moore. “I felt him coming,” the actor tells me, smiling and trying to inject some humor into a moment that could have left him paralyzed or dead. With his smile fading, Moore quickly jettisons any shred of Hollywood prep and years of screen time, sits back in his chair and furls his brow. “I don’t remember spinning or flipping off my bike—nothing,” says Moore. His voice takes on a more serious tone: “I got lucky—and then some.”

To read the complete article, the magazine is now on sale and available to the public.