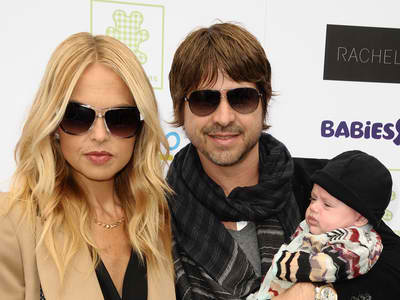 Hollywood has an ongoing love affair with celebrity babies, their fashion and their bling; so which ‘Tinseltown Tot’ is rocking it best?  Well there seems to be a new cutie on the block who is definitely bringing it, because when it comes to fashion, many may agree, his mama has copyrights to the handbook.

According to USmagazine.com, Rachel Zoe has spared no expense when it comes to dressing her four-month-old son Skyler in the latest designer fashions.

During a Wednesday appearance on Nightline, the 39-year-old stylist took ABC’s Juju Chang on a tour of her son’s luxe walk-in closet. Zoe proudly showed off Skyler’s $1,160 Gucci bomber jacket, as well as his $3,700 shoe collection. Though the infant is too young to walk, his footwear options include a $150 pair of Tod’s loafers (among several other high-end labels). Skyler’s shoes are kept in an Oeuf mini-library, which retails for $650.

Other pricey items in Skyler’s nursery include a giant stuffed giraffe ($163), a silver piggy bank ($1,355) and $78,000 worth of designer clothing, according to estimates by The Daily Mail.

Read more of the article on USmagazine.com.