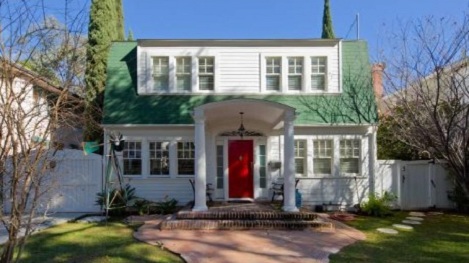 NO THANKS! Original ‘Nightmare on Elm Street’ home for sale

If you ever had the pleasure, I mean the horror, of watching the original “Nightmare on Elm Street” released in 1984, you would NEVER want to purchase the house where “Freddy Krueger” tried to slice and dice “Nancy.”  Would you?

According to Realtor.com, the Hollywood Hills home used in the original horror flick is on the market.  Bad…investment… if you are a fraidy cat like me.  I still have nightmares of the nursery rhyme alone!

But on the other hand, it would be a great investment and conversation piece for the owner during parties, and some people may love to live in the home featured in what was surely the scariest movie in the eighties.  The movie starred Robert Englund, Heather Langenkamp and Johnny Depp.

Just in case you’re interested, the home has three bedrooms, four bathrooms and is listed for $2.1 million.  Happy House Haunting… get it?  Yes, I am pretty lame, forgive me!  🙂