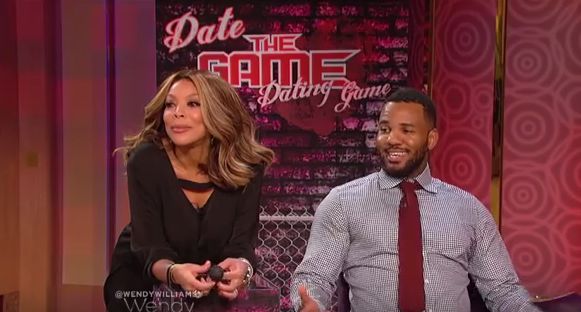 Keeping up in “The Game” of Love with Jayceon

Rapper “The Game” spilled the TEA on the romance rumors surrounding him and set the record straight about his dating exploits during a recent appearance on The Wendy Williams Show.

Although some would say being rumored to be paired up with Kim, Khloe and Karrueche Tran is a compliment, The Game puts all those accusations to bed.

After Khloe kicked her NBA-hubby Lamar Odom to the crib during their messy divorce, she was spotted hitting the streets and partying hard with The Game. So it comes as no surprise that everyone thought a match was lit between the two. Wamp Wamp… actually, the two of them hitting it off was far from the truth.

“Khloé’s just a really good friend. Before you guys knew her as ‘Khloé Kardashian,’ she was just like the tomboy Kardashian,” he explained. “She was cool. She would come hangout with us and chill. It was never about that.”

Now, he did have a “lil’ somethin’ somethin’” going on with another member of the Kardashian Klan once. You all may remember that The Game and Kim shared a brief moment together way back when, but when asked to comment on that flame, the star respectfully said, “That’s all irrelevant now. Kanye West’s great. Kim’s great. They’re great for each other, you know. Kanye’s a really good friend of mine, he’s got a really good family structure, that baby is just to die for, I don’t want to disrespect their family infrastructure.”

What a class act.

On another note, inquiring minds began to wonder when The Game “liked” some of Karrueche Tran’s photos. Feuding rumors between the rapper and Tran’s ex-boyfriend, Chris brown, started to surface and fans begin to wonder if the two had any beef.

Sounds silly huh? Just because he liked a couple photos, the world suggested he and Chris were at war!

“We aren’t fighting. Chris is a good friend of mine, he’s a really great talent and a really good guy,” The Game explained. “All I did was like a few [of Karrueche Tran’s] pictures. He didn’t get angry or anything. They were nice pictures, that’s what Instagram is for, you know! On the same day, I liked a few of your pictures, I liked some of Rihanna’s, and two of Beyoncé’s. They picked Karrueche out of that. I don’t know, media does that. All the blog sites they twist it.”

Now onto a more serious matter of the heart. The Game is very much still in love with his ex-fiancée, Tiffany Cambridge. He admits that he messed up and didn’t realize what he had until it was gone.

“I was a dog. I had infidelity issues and I kind of blew it. It’s pretty much my fault because I had a good woman,” he admitted. “She’s a school teacher, (has a) masters degree, mother of my children. You don’t really get it when you’re in the relationship. You get out, you know and she kicks you to the curb and then you realize what a great woman you had.”

Well, personally, we don’t think he is going to find true love on his new reality show. But maybe this is just what The Game needs to stop playing games — and go back home to Tiffany – where he belongs!

Good luck Jayceon Taylor, from your girlz at N.W.A.!