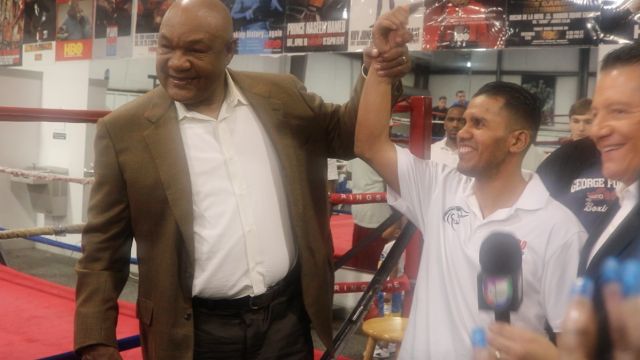 Houston legend, “King of the Grill” and former Heavyweight Champion of the World, George Foreman Sr., mixed it up with local fans during a special workout session at his youth and community center on March 15.  He was joined by boxers Juan “Baby Bull” Diaz and Arturo Marquez, son of Houston legend Raul Marquez.

The community event was held ahead of Diaz’s rumble against Mexico’s Fernando Garcia. The fight, which was to be held at the Arena Theater on March 19, was expected to breathe life into the city.  That message was made clear by Foreman, who was helping to promote Diaz.

He was also hand to inspire the youth to get more involved in the sport.

“The George Foreman Youth and Community Center was set up for kids to come in, no matter how old you are, to start to learn to box because boxing makes leaders, you don’t have to be a follower,” he said.

Pound for pound and round for round, “Big George” spoke to kids and other attendees about the importance of staying in shape and stressed that boxing is a skill, and success begins with the mind.

“Boxing is all about art.  As a matter of fact you have to know exactly what you are doing at all times. Baby Bull was just telling me a moment ago about staying in shape,” he told Crystal Martinez of NewsWithAttitude.com.  “You can be the best fighter in the world, but if you are caught out of shape for a long period of time then someone can win and beat you, so it’s about conditioning the mind as well.”

“Big George,” as he is known, is a two-time world heavyweight champion and Olympic gold medalist. The legend has fought other legendary fighters in what can be considered some of the most historic bouts of all time.  He won the the championship title after knocking out Joe Frazier in 1973, and had two successful title defenses before losing to Muhammad Ali in “The Rumble in the Jungle” in 1974.  He made a stunning comeback at age 45 when he regained the heavyweight championship after knocking out Michael Moorer.  Foreman remains the oldest heavyweight champion in history.  Now he gives back to the youth, passing the legacy on through mentoring.

His focus on Diaz, his “raging bull,” who was on a mission to win.

Foreman grew up in Fifth Ward, and was honored to have Diaz by his side at the same place he trained for his comeback fight. Diaz, who is also from Houston, was happy to be fighting at home.

“I’m coming back after an injury and I get to fight again in front of all my family, friends and all the H-town people,” Diaz said. “It’s special because a lot of the Houston fans have been wanting some big fights to come here. Being an action fighter I’m very excited to give the fans their money’s worth.  I’m going to give them a good fight.”

Foreman said he had no doubt that Diaz was going to give Houston a great fight.  And he did.  Diaz knocked out Garcia in the ninth round.