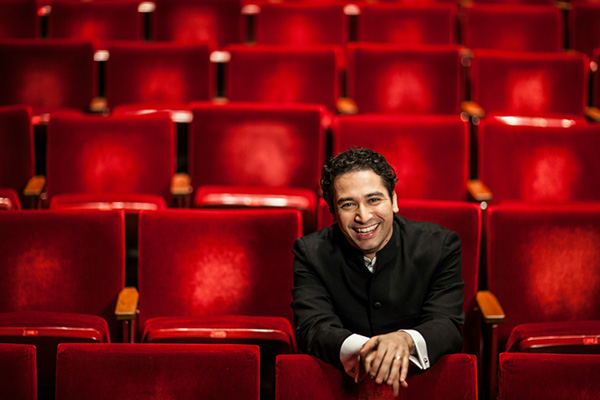 HOUSTON – The entire community is invited as the Houston Symphony welcomes its 15th music director, Andrés Orozco-Estrada, for the start of his inaugural season with a weekend celebration of music. Launching his tenure in Houston with three nights of exciting programming, Andrés will take the podium for performances on Friday, September 12 through Sunday, September 14.  This milestone moment in the Symphony’s history is not to be missed!

“It’s important for me to start my inaugural season with a celebration for the entire community,” Andrés says of the weekend that includes two free concerts. “I’d love to invite the whole city of Houston to attend!”

The weekend will kick off on September 12 at 8:30 p.m. with “¡Bienvenido Andrés!,” a free performance at Miller Outdoor Theatre, complete with fireworks!  Audiences are encouraged to arrive as early as 6:30 pm to claim their seat on the hill and experience pre-concert activities in the surrounding area, including music, salsa dancing lessons and activities provided in partnership with the Houston Dynamo and Mega 101FM.  Starting at 8:30pm, Andrés will lead the orchestra through music of Colombia and America, complete with folk dancing and other festive elements.  Venezuelan pianist Gabriela Montero will dazzle the audience with Gershwin’s jazz-influenced Rhapsody in Blue. This concert is made possible in part through the support of the City of Houston through the Miller Theatre Advisory Board and Houston First Corporation and will be broadcast live by Official Television Partner KTRK-TV Channel 13.

The “¡Bienvenido, Andrés!” weekend continues with the Houston Symphony’s annual Opening Night Concert and Gala on Saturday, September 13 at 7:30 p.m. at Jones Hall.  Patrons will salute the official start of Andrés’ inaugural season, accented with the British trumpeter extraordinaire and 2013 Gramophone Awards’ “Artist of the Year” Alison Balsom.  The concert will begin with Mozart’s delightful Overture to The Marriage of Figaro followed by Balsom playing Haydn’s Trumpet Concerto and concluding with Pictures at an Exhibition, Mussorgsky’s ten-movement suite orchestrated by Maurice Ravel. The Opening Night concert is once again generously supported by ConocoPhillips.  Following the concert, Gala guests will continue the evening with elegance and Colombian festive fun at a black-tie dinner and dance at The Corinthian chaired by Barbara and Pat McCelvey.  Guests will dine on cuisine by Jackson and Company with the sounds of the Richard Brown Orchestra and enjoy late night dancing with a DJ.

The 2014-15 season marks the entrance to the Houston Symphony’s 101st year under the baton of Andrés, who begins a five year contract with the organization.  Born in Medellin, Colombia, he began his musical studies in violin and first conducted at age 15. At 19 years old and speaking only Spanish, Andrés traveled alone to Vienna and completed his degree from the renowned Vienna Music Academy with distinction.  With his infectious warmth, love of people and electricity on the podium, the 36-year-old Colombian-born and Vienna-trained Andrés is looking forward to creating ongoing, meaningful connections with patrons and engaging more Houstonians in orchestral music during his first season and beyond.

“I am so proud to become part of this wonderful city and the 100-year tradition at the Houston Symphony,” said Andrés. “Every time I walk onto the Jones Hall stage to rehearse and perform with these musicians, I feel something extraordinary, and I look forward to sharing this excitement, connecting more closely to the music, with all of our patrons.”

¡Bienvenido, Andrés! Concert
Friday, September 12, 2014, 8:30pm
Free Community Performance at Miller Outdoor Theatre, with Fireworks!
Andrés Orozco-Estrada, conductor
Gabriela Montero, piano
Tickets: FREE
This is a ticketed event for the covered seating area. Free tickets are available at the Miller Outdoor Theatre box office the day of the performance, between the hours of 10:30am-1pm. As always, there is open seating available on the hill.

Concert and Gala at Jones Hall and The Corinthian
Andrés Orozco-Estrada, conductor
Alison Balsom, trumpet
Mozart: Overture to The Marriage of Figaro
Haydn: Trumpet Concerto
Mussorgsky/Ravel: Pictures at an Exhibition
Concert Tickets: from $29

For questions and more information on gala tickets (which include a concert ticket for the evening), please contact Special Events at (713) 238-1485 or specialevents@houstonsymphony.org.

Gala at The Corinthian

During the 2014-15 season, the Houston Symphony enters its second century as one of America’s leading orchestras with a full complement of concert, community, education, touring and recording activities. This season also marks the inaugural year for new Music Director Andrés Orozco- Estrada. The Houston Symphony is one of the oldest performing arts organizations in Texas whose inaugural performance was held at The Majestic Theater in downtown Houston on June 21, 1913. Today, with an annual operating budget of $30.7 million, the full-time ensemble of 87 professional musicians is the largest performing arts organization in Houston, presenting more than 286 performances for 300,000 people, including 82,000 children, annually. For tickets and more information, please visit www.houstonsymphony.org or call (713) 224-7575.