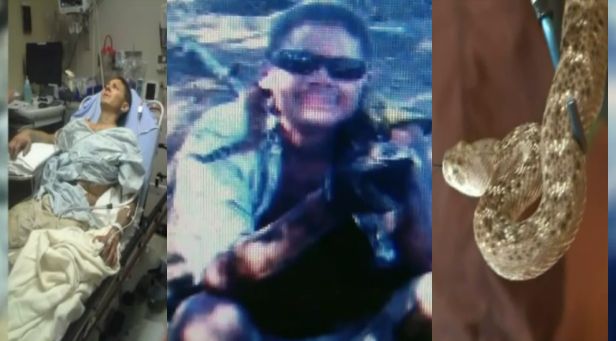 Welp, how can we sum this up?  A man sees a rattlesnake, he decides to pick it up to take what — a selfie — and not many are surprised by what happened next.  The snake bit him and the man is in the hospital, lucky to be alive, but in jeopardy of losing his hand.

You see, Alex Gomez spotted the 4-foot long snake behind his Lake Elsinore home and thought it would be a great opportunity for a photo-op.  NOT.  The snake obviously thought otherwise and showed Gomez why you shouldn’t pick up snakes..in the wild…with its tail rattling signaling you to stay away.  Just a thought.

Gomez ignored all the signs and ended up being airlifted to a local hospital, given anti-venom, and suffering in lingering pain as parts of his swollen body turned black and blue.

Even Gomez’s mother had a few choice thoughts about her not-so-smart son.

“I was terrified and I said ‘what a fool, stupid, you could die,’” Debra Gomez said.
We agree.