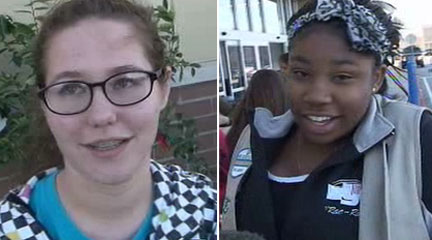 FORT BEND COUNTY, Texas – A group of Girl Scouts tried to fight back when they were robbed by a suspect outside a Walmart in Fort Bend County Saturday afternoon. But the thief got away with all of the hard-earned money earned from their cookies sales.

But the girls’ “normal” day quickly took a turn for the worse.

The girls were selling cookies outside the Walmart on Grand Parkway at Bellaire around 1:50 p.m. when they were approached by a man they thought was a potential customer.

“A guy came up and was asking, ‘How much are your cookies?’ and so we were telling him and there was a guy in the car who was like, ‘Hey, hurry up,’” said Rachel Johnson, a 9-year Girl Scout senior. The girls thought the men were just really anxious to get cookies, but they were wrong.

“Instead he grabs our cash box and runs over to the car and drives off,” Johnson said. “They drive off and I sort of hang on to the car and it drags me a bit.”

Cotton ran to help her friend.

“Me and my friend, Rachel, went after the money and then they tried to hit me with the car. I started hitting the boy that was in the passenger seat, so I think he learned his lesson a little bit,” Cotton said. “And then they dragged my friend Rachel across the street driving off real fast.”

The suspects escaped in a black Toyota Camry and got away with an estimated $200. They remain on the loose.

Johnson, who sustained minor bumps and bruises, would like to send a message to the alleged crooks.

“Who steals from a Girl Scout? I mean, seriously, it’s like the worst thing ever,” she said. “I hope your face hurts from when Iravia punched you — jerks!”

Click here to read more of the story on KHOU.com

Check out the video of the girls going off, courtesy of KHOU.com.