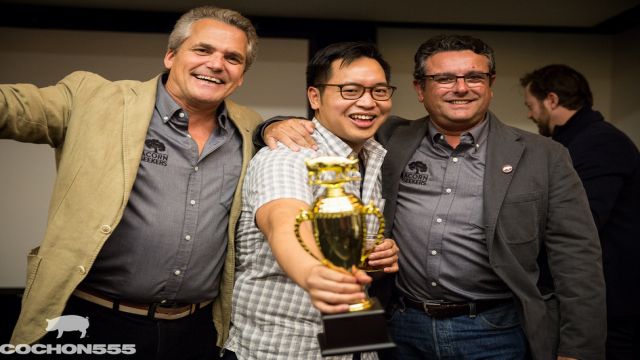 HOUSTON — Hey, this is the South, so YES, we love anything related to bacon, and any and everything pork!

This past Sunday, Cochon U.S. Tour crowned the Houston winner of its 10-city traveling culinary competition.

Chef Justin Yu of Oxheart Restaurant has been deemed the Prince of Porc, beating out Jean-Philippe Gaston of Izakaya Itanji, David Cordua of Americas, Richard Knight of Hunky Dory and William Wright of Helen Greek Food and Wine.

“It was amazing to return to Houston again this year; I was honored to be surrounded by such a diverse and talented group of chefs,” said Cochon555 founder Brady Lowe. “A big thank you to all the chefs, sponsors, our team and everyone at JW Marriott Houston Downtown, who executed an epic event for our return to the city. I thank everyone who participated and a much-deserved congratulations to winning chef, Justin. It was such an amazing turnout, and I’m truly honored to have collaborated with a team of amazing chefs, sponsors and partners who worked together to put so much energy toward the good food movement.”

The chefs prepared show-stopping dishes using whole heritage-breed pigs from family farms in a head to tail showcase for a crowd of pork-loving gourmands.

Chef Justin will now go on to represent Houston against the other nine cities’ winners in Grand Cochon at Snowmass / Aspen for the title of 2015 King of Pork.  The grand prize winner will receive a four-day wine experience in Rioja, Spain’s most prominent wine region. Grand Cochon features ten chefs competing for the crown and guests attending the event can book tickets for Heritage Fire, the country’s premier live-fire event which both fall on the same weekend as the Classic in Aspen.

On Friday, the weekend began with the Late Night Asian Speakeasy Dinner hosted by Jean-Philippe Gaston of Izakaya Itanji. The all-star lineup of chefs included Anthony Calleo of Pi Pizza, Jordan Asher, Adam Doris of Pax Americana and Manabu Horiuchi of Kata Robata with the support of Sun Noodle. The family-style feast began with a reception of hand-crafted punches with The Perfect Puree of Napa Valley alongside a special tasting of Martínez Lacuesta reserve vermouths. On Saturday, February 27, the epic culinary weekend continued with a three-hour culinary experience, the Chef’s Course Dinner Series, hosted by Lyle Bento of Southern Goods  and guest chefs Jonathan Jones of El Big Bad, PJ Stoops of Foreign Correspondents, Randy Rucker of Bramble and Chris Leung of Cloud 10 Creamery. The dinner began with a reception featuring a selection of passed hors d’oeuvres from each chef alongside a special tasting of Martínez Lacuesta Vermouths followed by five courses paired with Alysian Wines. Altogether, more than $6,500 was raised for the Piggy Bank initiative through the Chef Dinners and Pop-Up Butcher Shop.