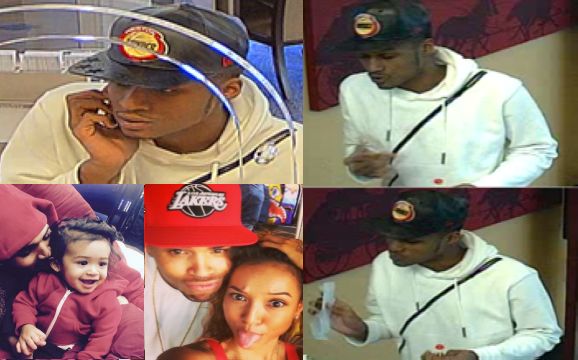 Yep, you heard it right.  The man who is dating the mother of Chris Brown’s daughter, Royalty, is a wanted man in Houston.

“It’s been a busy morning at Crime Stoppers with Hollywood reporters calling us about a wanted fugitive we are looking for in Houston that happens to be the step-father of Chris Brown’s daughter,” Crime Stoppers of Houston posted on Facebook.  Then they thanked TMZ for the coverage.  Well, we are going to give them a little boost too.

According to a Crime Stoppers release, the suspect is known by four different names: Kevin, Kelvin, Kingba and Brazil. He committed Felony Forgery – Theft by Check in several local banks right here in Houston.

Investigators say the suspect forged US Treasury checks totaling over $5,000 and deposited them into local bank accounts.  He then withdrew cash from those accounts.

Kevin, Kelvin, Kingba, Brazil — or whatever his name is — is thought to be between 24 to 27 years old, approximately 6 feet 1 inch to 6 feet 4 inches tall and weighs between 180 and 190 pounds.  And they have some clear photos of him for your viewing pleasure.  Anyone need a reward?  Or just a little gossip?  Well, pass it on.

There you have it.. Six degrees of separation ..of ratchetness!