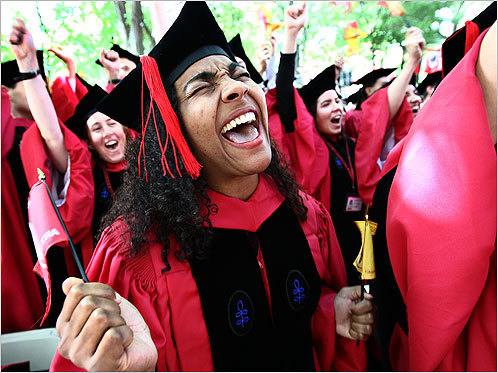 Black students at Harvard to host their own graduation ceremony

Earning a degree of any kind from Harvard University is a very high honor in itself and an accomplishment that will be remembered for a lifetime. This highly-recognized achievement will be even more special for the 2017 Black Harvard graduates because they have decided to host an individual ceremony. It is the first graduation of its kind at the school in recent history, and it took students a year to plan.

The separate graduation is not about segregation, but more so an effort to highlight the strength, struggles, resilience and achievements that Black students have had to grasp in an institution where minorities are underrepresented, but still thrive and rise to the occasion of success.

According to the Root, “This is an opportunity to celebrate Harvard’s Black excellence and Black brilliance,” said Michael Huggins, who is graduating with a master’s in public policy from the Harvard Kennedy School. “It’s an event where we can see each other and our parents and family can see us as a collective, whole group. A community.”

“This is not about segregation,” Huggins added. “It’s about fellowship and building a community. This is a chance to reaffirm for each other that we enter the work world with a network of supporters standing with us. We are all partners.”

In a time where incidents of racism have sparked a fuse on many college campuses in America, provoking minorities through violent comments and hatful acts, this ceremony will remind people of the many contributions that Black students at Harvard University have made.