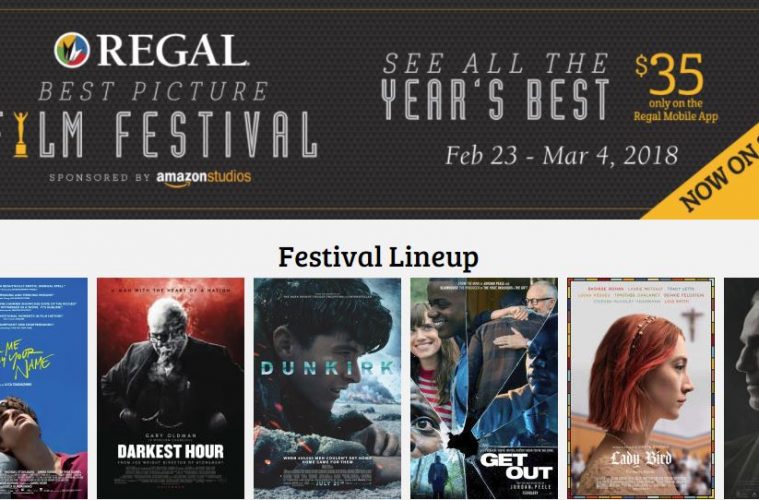 Festival Passes are now available to purchase, providing exclusive access to all nine films for the special price of $35.

“As we continue to look for innovations to the moviegoing experience at our theatres, the Regal Best Picture Film Festival gives moviegoers the opportunity to see all 9 nominated films back on the big screen,” said Ken Thewes, Chief Marketing Officer at Regal. “These films are the best of 2017 and with the Festival Pass, moviegoers can make sure they see all nominated movies prior to the start of the awards show.”

The films nominated for this year’s Best Picture Oscar® are:

“The Academy Awards are recognized as one of the most highly-acclaimed cinematic achievements,” said Steve Bunnell, Chief Content and Programming Officer at Regal. “Regal is the ultimate destination for moviegoing during the awards season, and we are excited to present these nominated films during the Regal Best Picture Film Festival at a fantastic price for movie fans.”

The event will be held at participating Regal theatres from Friday, February 23, to Sunday, March 4. Festival Passes are available now on the award-winning Regal mobile app. For showtimes and ticketing information, as well as a list of participating theatres, please visit http://regmovi.es/BPFF.

In addition, Regal is sending one lucky winning Crown Club member and guest to experience the thrill of the red carpet firsthand at the 2019 Academy Awards® Red Carpet Arrivals. Regal Crown Club members will become eligible by swiping their Regal Crown Club cards when purchasing tickets to any best picture-nominated film between now and Sunday, February 26, or by purchasing the Regal Best Picture Film Festival Pass. This spectacular opportunity is available at Regal for movie lovers who dream of experiencing the cinema magic come to life on the red carpet.

Regal fans are encouraged to like Regal Cinemas’ Facebook page and download the Regal mobile app. Moviegoers can program their favorite theatre and purchase tickets all from their mobile device. The Regal mobile app also gives patrons the ability to join the Regal Crown Club card straight to their phone for easy access while on-the-go. Through the industry-leading Regal Crown Club, approximately 14-million active members each year accumulate credits at the box office and concession stand to earn rewards including free popcorn, soft drinks and movies. Free membership is also available online at http://www.regmovies.com/Crown-Club.