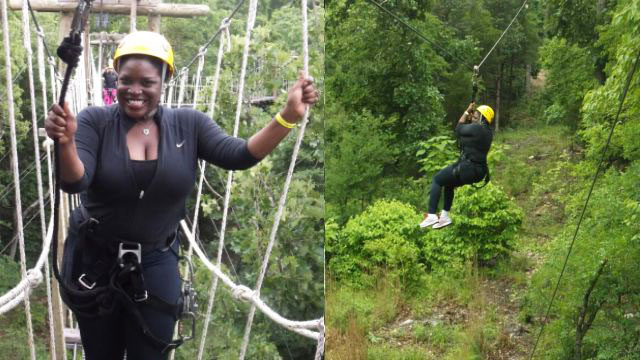 So many things to do, yet so little time…and I’m not wasting a moment! No, I’m not DYING from a terminal disease, but I was dying from monotony – so I decided to make a bucket list and live out adventures to free me from — myself!

Let’s face it, I’m a single mother who works for a major television news station, so just between the “lack of” dating world and writing headlines every day, I have more than my fair share of “doom and gloom” in my life.

I got tired of being the one who sat silently while everyone else talked about their vacations. I had nothing to add nor any experiences to share because I had NOT Been There Done That!

I was also tired of living vicariously through everyone else’s Facebook, Instagram and Twitter vacation pics. Determined to make my own memories, I decided it was time to do something, but I just did not know what. I was too afraid to move forward, but more afraid of staying back so I said “Hell’s Bells” (Sorry, had to channel my grandpa there) and said “Kia, get off your ass, stop making excuses and GO!”

In my overly meticulous nature, I had to write a list so I could scratch off each fulfilled dream one by one. I’m a mom, we LIVE by lists!

So what did I call it?   My #BlackGirlBucketList because I wanted to do things that was a little out of the norm for some of my family and friends.

DONE! I’LL DESCRIBE HOW I SCARED THE S*%$ OUT OF MYSELF AT THE END OF THIS ARTICLE

HEY WAIT… DID THIS ONE TOO! AND WON FIRST PLACE BABY!

Soooooo… where did I go to tackle my ziplining? Somewhere TOTALLY UNEXPECTED, of course… To Branson, Missouri of all places! But before we get to me screaming through the trees, I have to tell you about everything else they had to offer. What an amazing trip!

The “Unexpected Branson” gives you more than you could ever ask or hope for. More than eight million visitors a year travel great distances to the city to forget their cares for a while, so do yourself a favor and join the fun!

The All-American destination has surprises on every corner to satisfy every desire and is more than the Branson you thought you knew. Branson is surrounded by three lakes and has countless attractions and entertainment options, but in other ways, the destination has remained unchanged since the early days of settlement. The unspoiled Ozark Mountain vistas, wilderness and waterways are as breathtaking as ever, and the scenery encapsulating the city is astonishing. The folks who live there still have a rugged and independent spirit, as well as a deep dedication to God, Country and family.

Awed with amazement is an understatement on my recent trip to the city.

Branson is the Live Music Show Capital of the World and, yes, the shows are awesome! I caught three shows during my trip and each one was wonderfully different, but equally amazing.

My very first night I had the opportunity to visit the White House Theatre to see The Adventures of Marco Polo, an epic tale of exploration and wonder, love and loss in the stunning style of Cirque Du Solei, brought to you by the same company that produced The Legend of KungFu. The quiet beauty of the performers at times, mixed with the daring moves and choreographed symmetry kept me spellbound. On my second night I set sail with Jonah, an original musical production from Sight & Sound Theatres. This lively, exhilarating family musical takes you on a fun-filled journey that carries you over land and sea, across deserts, into royal palaces –and deep within the belly of a big fish!

On my final night, I was able to let loose and shake a tail feather or two with the performers at Legends in Concert! This world famous live tribute show features an amazing cast of all-star entertainers assembled on one stage in one of the most sought-after productions in the world. Now, who was my favorite? Being from the younger generation, I would never think I would be an Elvis fan, but the “King” definitely reigned supreme during the extravaganza. “The King” reigned supreme at Legends in Concert in Branson

No vacation is complete without museums and history and I was honored to step through an iceberg at the Titanic Museum and today, the great Titanic lives on. Upon arrival, guests are given a card connecting them to a passenger aboard the ship, and at the end of the tour, you learn their fate. I was immediately pleased when I turned over my card to learn I was assigned the “Unsinkable Molly Brown” and of course, I knew her fate, but was thrilled to learn even more about her from the tour guide.

As if that wasn’t enough, I visited Silver Dollar City where I made crafts, experienced some true thrill rides, learned how to make a hell of a burger in a cooking class and took an underground tour of Marvel Cave, which was discovered by the Osage Indians around 1500 AD. Now let’s stop there for a minute. A sistah had to climb up and down 700 steps for this part of my adventure and my thighs were screaming for mercy from the Almighty – but seeing the beautiful cave was well worth it – I realized once I caught my breath! And for the grand finale – or what I will remember for the rest of my life – was conquering my fears at Branson Zipline and Canopy Tours. I was able to soar into adventure and fly through the Wolfe Mountain canopy while gaining an up-close understanding of the ecology of the Branson area along the 2.5 hour Ozarks Xplorer Canopy Tour, located in the heart of the Ozarks wilderness on Wolfe Creek Preserve. Insisting on having a “bucket list” adventure, I pressed my friend to join me. But just one problem, I was the one who tried to chicken out when we made it to the top. It was a true bonding experience and I can honestly say I met friends for life as my team encouraged me to trust and just let go….now after that, the screaming they heard echoing through the air was something that I will just blame on them –for they were the ones who talked me into it. Right? The point is I came, I saw and I screamed – but I conquered – and it was worth every minute of it! Until the next adventure – Cyber kisses, my luvs! So what you don’t hear is me bargaining to try to get OUT of the mess I got myself into on right photo…then thankfully you can’t hear me SCREAMING as I flew through the air on left photo after I was told it was too late to turn back…me and my big mouth! #ExploreBranson #BransonZipLine #BlackGirlBucketList

But screeeeccchhhhhhh, hold the phone.  My trip didn’t start off this great.  I guess I should mention that we were stranded 14 hours in an Arkansas airport due to a storm, forced to sleep on a cot and I had to take my beloved ponytail off in front of mere strangers –as if– but I will save that “refugee” debacle for another day… All of that was a distant memory once I made it to my beloved destination — until next time, Branson — see you again soon — hopefully! @NewsWitAttitude — Let’s just say things got interesting when @bckybr & I were stranded 14 hours in airport due to storm, but we made it