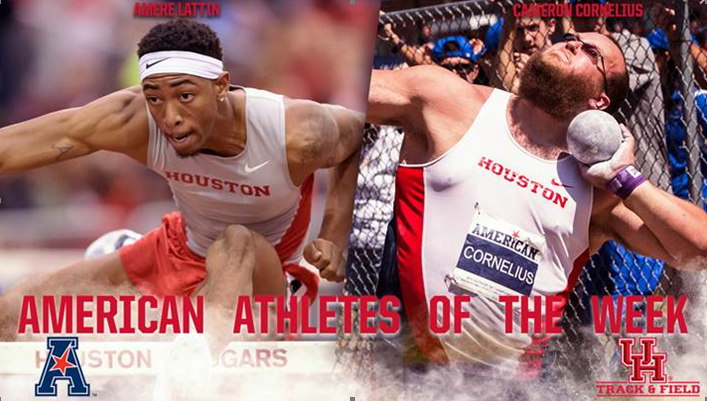 Competing in the 60-meter hurdles, Lattin clocked one of the fastest times in school history at the Tyson Invitational on Saturday. Lattin finished both the prelims and the finals of the hurdles in 7.74 for the third fastest program mark and the No. 7 time in the nation according TFRRS.org.

Lattin was also in action as the first leg of the 4×400-meter relay, where he helped the Cougars run 3:09.95, the fastest time in the American this season. The award for Lattin is the first weekly honor of his career.

Cornelius was in action in the shot put for the fourth time this season at Houston’s home meet the Howie Ryan Invitational. After reaching the finals with a top mark of 58-0.25 (17.68m), Cornelius improved on his season best with his final throw. Cornelius launched the shot 59-7.0 (18.16m) to win the event and set the top mark in the conference this season. The Deer Park, Texas, native has now won all four of the shot put competitions he has entered this season.

Cornelius will be named Co-Field Athlete of the Week as Tulsa’s Aleks Rapp also earned the honor with the top weight throw mark in the conference this season. The award for Cornelius is the first of his career.

Houston has now won nine American Conference Athlete of the Week awards this season. Last week, senior Tori Williams earned her second honor of the season after setting the top time in the conference in the 200-meter dash. Senior Cameron Burrell has earned three honors this season (two track, one field), while Eli Hall (Track), and Brian Barraza (Track) have each also garnered the honor.

UP NEXT FOR HOUSTON

The Cougars have nearly two weeks to prepare for the American Athletic Conference Indoor Championships in Birmingham, Ala. The Houston men will hope to claim their third-straight indoor conference crown, while the women will look to improve on their ninth place finish from last season.

Fans can keep up with the latest in University of Houston Cougar athletics by following us on Facebook (Facebook.com/HoustonAthletics), Twitter (@UHCougars), Instagram (houstoncougars) and YouTube.com (Youtube.com/UHAthletics). In addition, the Track & Field team has established its own official Facebook (facebook.com/HoustonCougarTrackandField) and Twitter pages (@UHCougarTF).