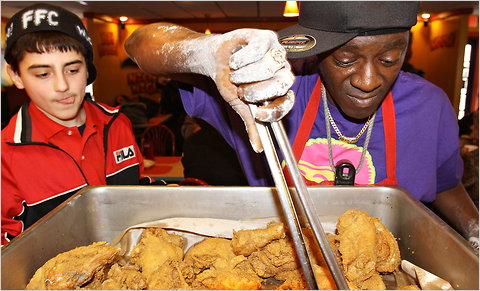 N.W.A. EditorApril 25, 2011
0 Comments 0
Shares
CLINTON, Iowa – Some people’s feathers may have been a little ruffled, others may not have been offended at all—but whatever your opinion about Flavor Flav’s new chicken restaurant — the business has closed down, according to wqad.com.
The reality TV star and his business partner apparently cut ties after exchanging harsh words over how the business was ran.
Wqad.com said Flav’s Fried Chicken in Clinton, Iowa closed on Sunday, just four months after opening to much fanfare. Flav, a founder of the hip-hop group Public Enemy and later a star of VH1’s “The Surreal Life,” and “Flavor of Love,” opened the business with Nick Cimino in January.
Flav told WQAD-TV that he was pulling a license that allowed Cimino, the restaurant manager, to use his name in the restaurant because he “isn’t running the business right.”
Cimino told the station Flav was “a fraud” who was trying to get rich off of his ideas and work.
“I started this,” Cimino told WQAD-TV. “I put together everything from the menu to the color of the building to the sign. I did everything. What Flav’s doing, he’s a fraud. He doesn’t want to be hurt with the other ventures he’s doing and he wants to become a millionaire off my dime, off my ideas.”

But Flav is telling a different story, saying he ended the business relationships because the employees were not being compensated for their work. Flav said that was the last straw.

“The reason I pulled the license was because there’s a lot of employees that weren’t getting paid,” he said.

We all knew Flav was a big fan of fried chicken. In fact, on his dating show, Flavor of Love, the clock-wearing Romeo would often treat the ladies to a “fantasy” date at KFC. He would go all out; complete with the limos and linen table cloths.

For more about Flav’s business closure, go to wqad.com.

Check out the Youtube video of Flavor Flav frying chicken