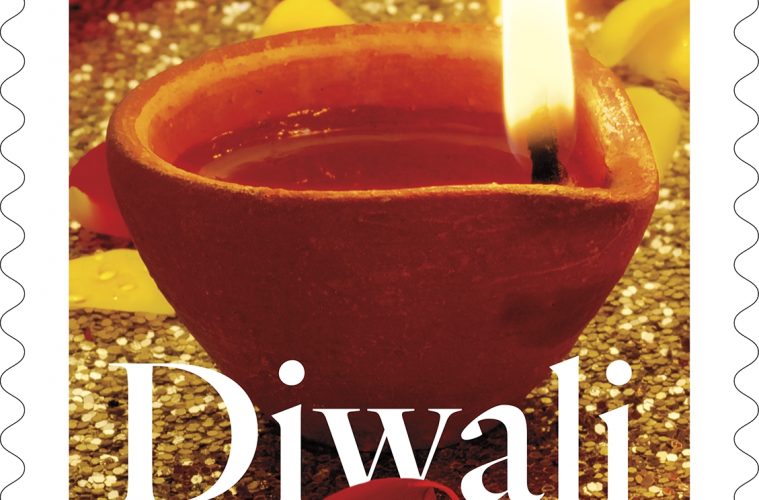 The public is asked to share the news using the hashtag #DiwaliStamp.

“The Postal Service is honored to issue this Forever stamp that celebrates the Festival of Diwali,” said U.S. Postal Service Vice President of Mail Entry and Payment Technology Pritha Mehra. “We hope these stamps will light up millions of cards and letters as they make their journey through the mailstream.”

“I am very honored to be part of history as the United States Postal Service releases the Diwali Forever stamp at the consulate today,” said Das.

“Since the start of the American Revolution, destiny has beckoned the United States and India to be the closest allies,” said Ravi Batra. “The Diwali Forever stamp represents nothing short of respectful inclusive indivisibility: E Pluribus Unum — within America and between two sovereigns.”

“While this journey may have taken years, the Postal Service has issued a Diwali stamp that will continue to resonate forever,” said Ranju Batra. “Now for the first time there is a stamp that celebrates Hindus, Sikhs, Jains and Buddhists as Americans forever. Our heartfelt thanks to all of those who have supported this stamp. The Diwali stamp will be a matter of pride for generations to come.” The stamp design is a photograph featuring a traditional diya oil lamp beautifully lit, sitting on a sparkling gold background. Diya lamps are usually made from clay with cotton wicks dipped in a clarified butter known as “ghee” or in vegetable oils.

Also known as Deepavali, Diwali celebrates the triumph of good over evil. Spanning five days each autumn, Diwali is considered by some to be the start of the new year.

On the Hindu calendar, Diwali falls on the eve of, or on, the new moon that occurs between mid-October and mid-November. In 2016, the main day of the festival will be celebrated Oct. 29 for South Indians and Oct 30 for North Indians.

Diwali is a shortened version of the Sanskrit word Deepavali, which roughly translates as “a necklace of lights.” During Diwali, the flickering oil-wick diyas sprinkle the homes of observers around the world.

Before the festival, many Hindus traditionally go shopping, clean their homes, open their doors and windows, create intricate rangoli — a vibrant floor pattern traditionally made from materials such as rice powder, colored sand and flower petals — and light diyas with hopes that Lakshmi, the goddess of wealth and prosperity, will visit. In some regions of India, people play games, just as Hindu lore says that the god Shiva did. On the festive main day of the holiday, families pray for Lakshmi, dress up in their best clothes, enjoy lavish feasts and sweets, exchange gifts and light fireworks. Diwali also marks the new year for people in Gujarat and a few other states of India. Diwali also is celebrated as a major holiday by followers of the Jain and Sikh faiths.

The Diwali stamp is being issued as a Forever stamp. This Forever stamp is always equal to the value of the current First Class Mail 1-ounce price.