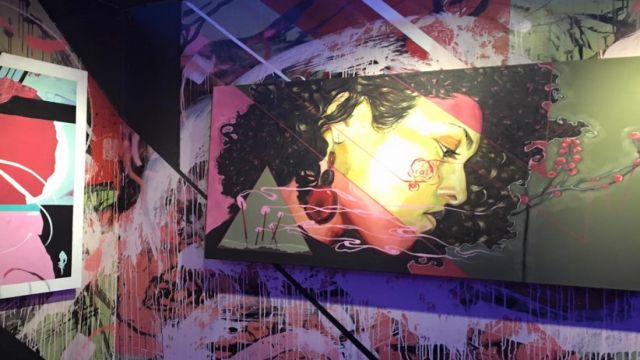 Urban art has been a hidden secret, from graffiti painted walls to spray painted cars, but not anymore. The once taboo art is now being showcased worldwide and was recently front and center in downtown Houston.  The Arts, Beats and Lyrics tour, presented by Jack Daniel’s Tennessee Honey and Gentleman Jack, was held at the Revention Music Center on Jan. 8.

The art show originally started off as a way to showcase urban art that might have otherwise gone unnoticed. But after the first show sold out, it quickly gained a buzz and international artists signed on.

A few of the artists at the showcase explained their love for art and why they continue to follow a non-traditional path.

Dwayne “Dubelyoo” Wright, one of the featured artists, displayed a masterpiece which showed his love for boxing.

“I love art, everything I am passionate about you can see it in my art,” Dubelyoo said. “Many of the artists have amazing work and it’s wonderful to see. I’m a big boxing fan. I started doing self-defense training about five years ago and it got me a little more into the fighting stuff.”

Dubelyoo had an intricate painting featuring Mike Tyson.  He explained that the entire painting was done with acrylic.

Attendees were treated to tastings of Jack Daniel’s and a surprise performance by Twista. Previous featured acts have included Kendrick Lamar, 8Ball and MJG, Pastor Troy and Master P.

To view more of the artwork, search #HOUABL on social media.