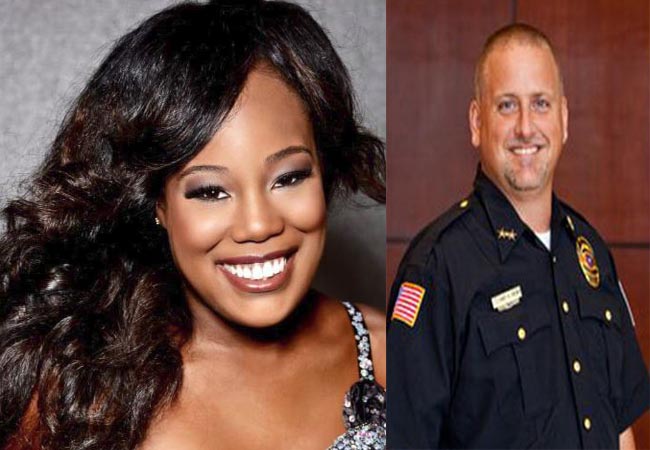 Miss Black Texas 2016 says she was arrested for DWB: Driving While Black

Last Saturday, Miss Black Texas U.S. Ambassador 2016 and Hunt County, Texas District Attorney’s Office intern, Carmen Ponder, was arrested. She claims she was driving safely, but perhaps was not “white enough” to be able to carry on with her day. Ponder claims that Police Chief Kerry Crews called her a “black bitch” and forced her to spend the night in jail.

The incident began with Ponder driving behind what seemed to be a careless driver. So Ponder signaled, maneuvered around the driver and continued traveling to her destination. The driver reportedly stopped abruptly several times and continued to drift in and out of lanes. The driver of the vehicle turned out to be Crew’s 14-year-old daughter, to whom he was giving a driving lesson to at the time.

Crews then followed Ponder to her destination and parked beside her at a Wal-Mart. As Ponder walked toward the entrance of the store, she was confronted by Crews as he yelled that he was teaching his daughter how to drive and she should not have passed them. Ponder said she ignored the man at first, but eventually told him that that was illegal before she walked into the store.

“He continued yelling and cussing me out and I finally turned around and said ‘It’s illegal,’ when he kept saying that it was a 14-year-old driving,” Ponder wrote. “That’s when he screamed ‘oh whatever, you black b—-!”

After purchasing her items from the store and walking back to her car, Ponder was then ambushed by several officers in plain clothes.

According to Ponder’s attorney Lee Merritt, “One of them shoved his badge in her face, told her that she ‘Better apologize to the police chief,’ but my client declined to so one of the officers grabbed her, pulled her back into Wal-Mart and told her she was being detained. When other officers arrived she walked back to her car to explain what happened. An officer grabbed her and demanded she be arrested for resisting arrest. She has bruises on her arms from where she was grabbed.”
Ponder took to twitter to make others aware of the incident, which appears to have been propelled by racism and road rage.

Ponder was charged with evading arrest and spent 24 hours in jail.

Authorities said Crews was placed on administrative leave while an outside agency hired by the city of Commerce conducts an investigation. There has been no word on what happened with the other arresting officers.

Ponder is calling for police accountability and has since launched a campaign to raise money for attorney fees to fight the charges. She is not only the former Miss Black Texas Ambassador 2016, but a bright student at Texas A&M-Commerce, an intern for the Hunt County District Attorney office and is also on the Dean’s list.

“My only crime…the color of my skin,” she said.