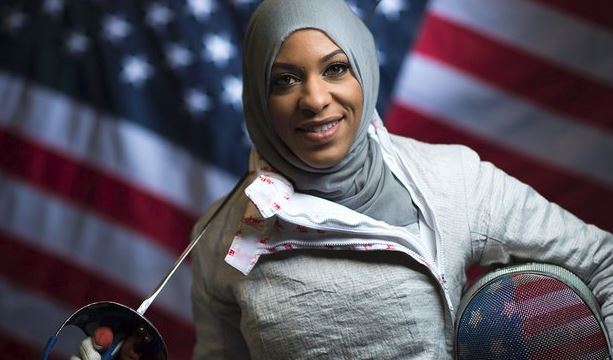 The United States is a land of endless opportunities, abundant hope and amazing diversity. This is truly evident this year as our country competes in the Olympics in Rio. One competitor in particular, U.S. fencer Ibtihaj Muhammad, has been receiving a lot of positive attention after she made history for being the first American athlete to compete in a hijab. The Maplewood, NJ native, who is a proud Muslim American, is showing people how she is comfortable in her own skin while representing her country.

Muhammad says her reason for competing in the Olympics is not solely based on bragging rights, but to show people that anything is possible. In her USA fencing bio, she stated, “I want to compete in the Olympics for the United States to prove that nothing should hinder anyone from reaching their goals — not race, religion or gender… I want to set an example that anything is possible with perseverance.”

We believe she is doing just that as she stands firm in who she is while representing the U.S. of A.!

Muhammad’s initial reason for competing as a fencer was being able to cover up without being questioned or looked at differently. Now that she has accomplished that, she wants to be a voice against those who speak hate and ignorance toward others who are considered different.

She told the Washington Post, “When I think of my predecessors and the people who spoke out against bigotry and hate, I feel like I owe it not just to myself, but to my community to try to fight it.”

Muhammad is not only an athlete and fashion designer, but someone who has even given lessons to First Lady Michelle Obama!

And she also has a few people to thank for her success, both in fencing and life, in general.

“My parents have guided me spiritually which has kept me grounded; my coach, Akhi, for believing in my athletic ability; and six-time Olympian Peter Westbrook for his guidance and support,” she told usfencing.org.

Even though she was eliminated early, we are extremely proud of Muhammad for telling “Herstory,” and wish her continued success in her career. Black Girls Rock!